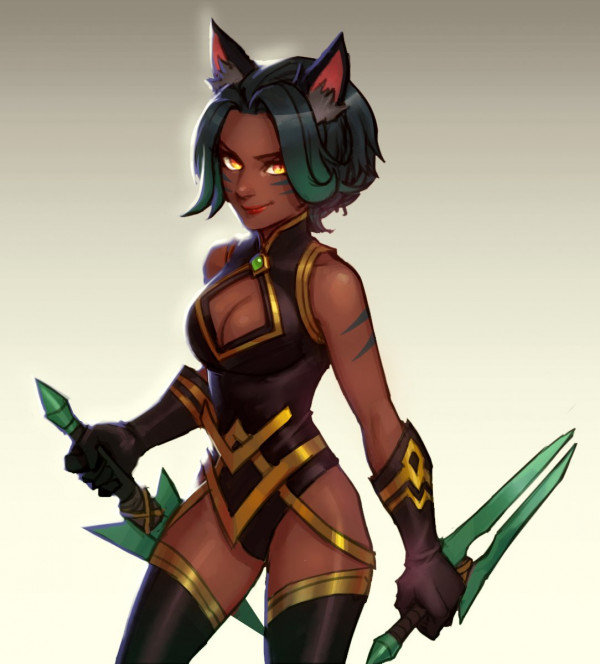 The Wilders are peaceful by nature. They have no real animosity toward the other peoples of the land and wish them no harm so long as they do nothing to harm the forest. That being said, the forests' inhabitants are an insular and guarded bunch. They don't often make contact with outsiders, and view those they don't know with an animal wariness. This is why Kaz was always considered something of an oddball in Wilder society. As is befitting her feline heritage, Kaz is fueled by an unabating curiosity that drives her to seek knowledge from beyond the seldom-crossed boundaries of the woodlands, breaking one of the most widely accepted of the unwritten laws of the Wilders. From the first excursion out into the lands beyond the forest, there was no going back to an unremarkable life spent in one place. The wonders of the outside world have enchanted Kaz, and though her adventures often get her into sticky situations, she is vigilant and quick witted, and can always defuse trouble or at least escape it. Each time she returns to the forest, she has some new trinket or knick-knack for her admiring friends. Kaz is as stealthy as one would expect, so her sneaking in and out of the forest usually goes unnoticed. In fact, she'd never been caught at all until the leader of the Dusk Watch, Lyca, saw her trying to slip away. It was to everyone's great surprise that, rather than a harsh word and swift punishment, Lyca simply asked “if you're going out to the fields and villages, take note of what you see. I want to know what's out there when you get back.” Lyca had known that trying to stop Kaz from exploring would only waste time and energy, both resources the Dusk Watch has to use wisely. Instead, she would use Kaz's natural proclivities and talents to the betterment of the forest. They continued this arrangement until Lyca was sure it was the right time, and invited Kaz to join the Dusk Watch. With the return of the Hypogeans and the Wilders' relative isolation, intelligence gathering would be a vital role in the coming months. Knowledge of the enemy alone isn't enough to win a war, however. Once you know your enemy, you still must land the killing blow. To this end, Lyca decided to hone Kaz's talents to another, grimmer purpose. Her stealthy way of moving about and ease of motion in the darkest night make Kaz the ideal assassin. Through unforgiving and careful training, Lyca has molded Kaz into a deadly asset, a tool by which the forest's will can be exacted far beyond its boundaries. Combining her powers of stealth, observation, and the kill, Kaz has been able to win several battles for her people before the battle has even begun. She stalks her prey like a leopard, watching and waiting, undetectable in the shadows, until the right moment. By the time she moves, it's too late for her target. Enemy sentries rush to alert their commanders of a rapidly approaching Wilder attack party, only to find their officers on the ground, their throats cut with cold precision, still bleeding out into the soil. By this time, Kaz is gone and the confused, demoralized enemy is routed. “Don't ever think that someone isn't watching.”