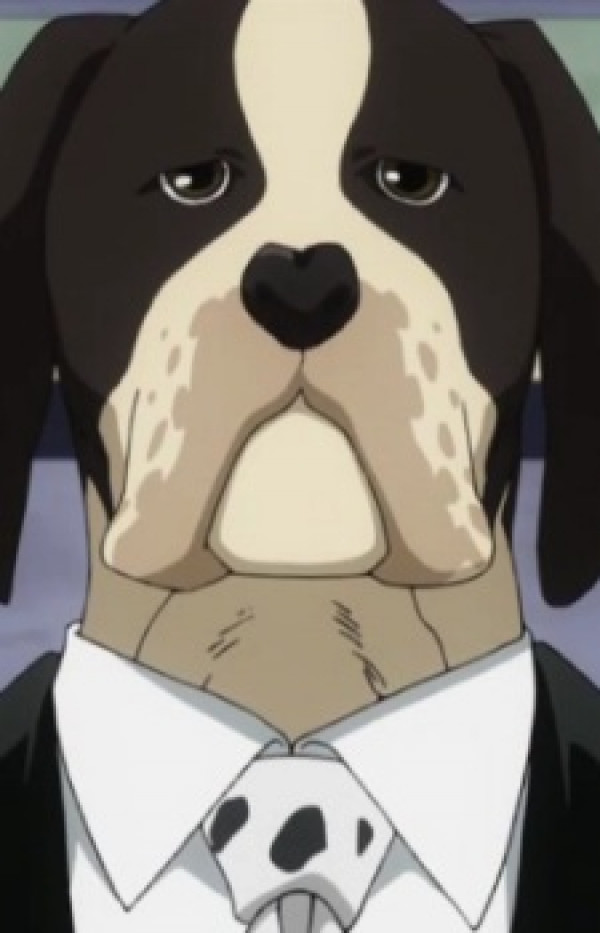 Kenji is a very tall, sturdily built man with the head of a beagle. The area around his eyes and his ears is a dark brown, the two sides separated by a tan line which runs down his forehead, widening at his muzzle, which is flecked with pale brown. He has a large, black nose and dark eyes, and, although the rest of his body is of normal human shape, his skin appears to be the same tan color as most of his face. He wears a suit, consisting of a dress shirt, and waistcoat, over which he wears an unbuttoned black blazer and matching dress pants underneath. He has a belt with quite a large buckle, and a black and white tie which somewhat resembles a dalmatian’s coat. As the Chief of the Police Force, he carries himself in an official manner befitting the position, except for his "woof" tic. While he is rigid in his following of the rule of law, he is still very flexible in its enforcement, as he is willing to explain how to avoid punishment to younger heroes. He gives respect to those who have done a good job, thanking Izuku Midoriya, Shoto Todoroki, and Tenya Iida for stopping Stain, even though they broke the law by using their Quirks without official clearance. He also has the habit of saying dog-related puns, acknowledging his physical appearance.