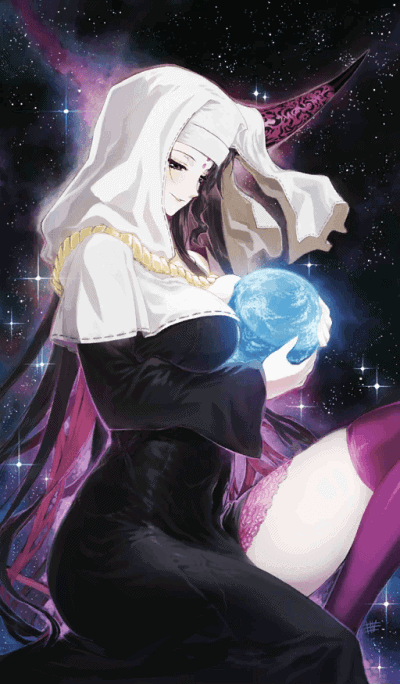 Kiara Sessyoin is the Master of Caster in Fate/EXTRA CCC and the game's true antagonist. She is also known as the Devil’s Bodhisattva and the Last Prophet. She also appears as Beast III/R and Alter Ego in Fate/Grand Order. She is Japanese and is in her mid to late twenties. Her attire resembles that of a Japanese Buddhist nun; she wears a tight dress with a slit up the left side exposing her leg and a large white habit similar to a hood with a large gold necklace wrapped around it. She claims that her habit of having a slit up the side is because everybody in the school are so distinctive and she wanted to take a risk of youthful indiscretion. Even Gawain considers her to have an amazing body. She also appears to wear a pink underwear. According to the side material book, Kiara doesn't cut her hair but keep it tuckled under her habit. After consuming Passionlip, Meltryllis, BB and Sakura her appearance changes to that of a demon. In her new form, Kiara's habit now hangs from the two massive black and pink lined curved horns extending from the sides of her head. Her black hair (with pink tips) now flows in twisting locks behind her and on her forehead lays three vertical dots similar to those of Savior. Her attire has become that of a revealing long white coat with belled sleeves and thigh high pink boots. According to Kinoko Nasu, her demon outfit was specifically requested by him to incorporate a "naked apron" theme. In Fate: Grand Order her final ascensions' outfit has her habit, sleeves, and cloak extended with the sleeves now have a design resembling multiple hands extending upward. She also wears a pair of golden rings with a hanging tassel. Her Demon Pillar outfit has slightly different design with the color scheme appears to be her white-pink outfit flipped inside out and her horns now are those of the Demon Pillar. Dressed in a nun’s attire, she is an air-head ero-older-sister type. Despite her troublesome tendency to brush off what others say, her attitude and behavior is even more suggestive than that of the Alter Egos. Truth be told, her sexual desire is beyond her control. Although she is wearing a nun’s clothing, it’s still easy to tell from the lines of her body that she is an unmatched beauty of a woman. By the way, she doesn’t cut her hair (tonsure) and instead just keeps it tucked under her nun veil. She refers to herself using “私”. She usually refers to others using “皆さん”, and usually adds -san at the end of peoples’ names. She is essentially a proper lady with a neat and tidy way of speaking. She has a soft personality, and a chaste set of values, but when she speaks, oddly enough her words carry a hint of sensuality. Her personality is introverted, timid, and active. She is very gentle and mild-mannered, but also positive and motivated at the same time. It may seem as though she has a weak constitution, but she is energetic and full of life. She is deeply compassionate toward others. She is deeply considerate and is good at grasping the reason or truth. She can read almost everyone’s feelings and correctly understand their position or suffering. Both on the outside and the inside, she is a talented woman overflowing with graceful beauty… She seems wonderful, but at the same time she is a bit absent-minded, and seems to have a lot of knowledge about sex… rather than “Holy Woman” she would be more appropriately labeled as a “kind older sister.” While she has trouble controlling her poison-tongued servant Andersen, she remains an upright character that never loses her smile.