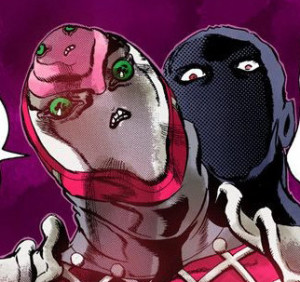 King Crimson, sometimes shortened to K Crimson, is the Stand of Diavolo, featured in Vento Aureo. It has a sub-Stand, Epitaph, which is primarily utilized by Doppio, Diavolo's split personality. King Crimson is a humanoid Stand of a height and build similar to Diavolo's, but tends to look much bigger and taller. Its body is covered by a raised diagonal grid; save for its face, neck, shoulder guards, elbows, hands, abdomen, crotch, knees, and feet/footwear. Its eyes comprise sharp orifices of a steep inward slant; from which emerge small, round eyes without sclera, with pronounced eye sockets that have the same fragmented pupils that Diavolo himself has. Its crown is flat and from its forehead emerges a raised level that bears a smaller, oval face of the same expression. In earlier depictions, there were two raised levels. It constantly bares its teeth through a small mouth. The aforementioned second face on King Crimson's forehead is named Epitaph, and is sometimes duplicated in the same position on Doppio's forehead when he is given some of King Crimson's power by Diavolo, the only difference between is that the two raised levels don't appear. Epitaph presents itself as a bump on the forehead featuring eyes and a mouth constantly grinding its teeth, often mimicking King Crimson's current mood and mouth movements.