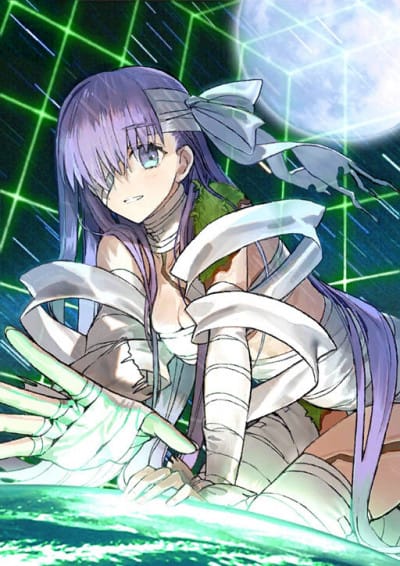 Kingprotea, Class Name Alter Ego G, is an Alter Ego-class High-Servant of BB in the CCC Incident of Fate/EXTRA CCC Fox Tail. She is also summoned by Ritsuka Fujimaru in the Grand Orders of Fate/Grand Order. Kingprotea is a giantified version of Sakura covered in bandages and green mosses, possibly referring to her being created from Earth Mother Goddesses. One of her eyes is pale purple; the other is usually covered by a bandage but is revealed to be orange-red in her third ascension. She has long hair that reaches down to the bottom of her body. Like other members of Sakura Five, she has a ribbon tied on the left side of her head with the color being white. Kingprotea's second ascension causes her to grow a large flower bud and long brown horns out of her head, while the bandages are replaced with further mossy growths. Her hands also develop red pads on their palms. She calls this her "kaiju form". Her third ascension, apparently drawing from her divine essences, lacks both the moss and the bandages, replacing them with an ornate green and white striped outfit that reveals an orange tattoo covering Kingprotea's abdomen. The flower bud on her head is now in full bloom, resembling a crown. Within the depths of her Maiden Coaster, Kingprotea is no larger than an ordinary girl and wears a wedding dress over her regular outfit. Kingprotea is the "Alter Ego of thirst of love." The original Kingprotea was an "innocent little girl hungry for love" that believed that her love for Hakuno could only be filled by devouring or killing him, but the Kingprotea released at the Cyberbrain City SE.RA.PH, perhaps due to the influence of Kiara, has gained knowledge from half-way of growing up. She has the image of a little girl that is about 14 years old in terms of mental age, introverted, and fickle. However, she’s greedy for love, so she pulls moves like those of a late bloomer, behaves positively, and is a girl who loves skinship despite being otherwise taciturn. The gap between resembling a rabbit that won’t come out in front of others or a friendly large-breed dog is amazing. Her self-confidence is lacking, in part because she realizes that BB had discarded her. She is not belligerent, but it’s not as if she hates/fears fighting. When it comes to battle, she will exterminate the opponent without mercy no matter how weak (of low level) they are. As long as she doesn’t feel pain in her heart. For good or for evil, Protea isn’t aware about she herself being a cruel god of destruction. In her mind, she is not giant- everything else is just too small. She is not powerful- everything else is too weak. Her dream is to be a "cute bride", but as the concepts of "cute" and "bride" are not separate in her mind she doesn't particularly think in terms of being cute, or in terms of maintaining a human size. She associates being given orders with being loved, and will eagerly obey her Master as best as she can. But if the affection from her Master is not enough, her hunger for love will become uncontrollable and she will ultimately consume them. Protea is fond of tokusatsu movies, having learned about them from SE.RA.PH.'s database and seeing how audiences loved kaiju despite their nature as enemies of humanity. Her second ascension's appearance was inspired by the design of a kaiju.