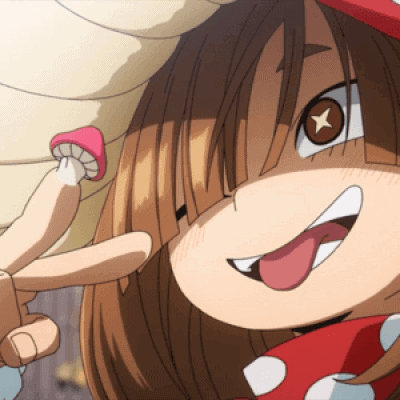 Kinoko, also known as Shemage, is a student in Class 1-B at U.A. High School, training to become a Pro Hero. Kinoko is a short girl of a rather thin build, with honey brown hair, curved inwards in a mushroom-shaped bob that reaches just below her narrow shoulders. She has a long fringe that completely covers her eyes, hiding most of her face, and her mouth is notably large. Unobscured, her eyes are wide and rather cat-like; tilted inwards with rather long lower eyelashes, and her irises are a warm brown color, her pupils little black crosses, both together highly resembling the caps of cross-sliced shiitake mushrooms. Her hero costume consists of a turtleneck dress with long sleeves and furred cuffs, which is decorated with a red and white fly agaric pattern, matching the one on her mushroom cap-shaped hat. She wears pale pink knee-high boots with thick tan soles and frilled shafts, patterned with the same fly agaric as her dress, and around her waist is a dark brown belt with a large golden buckle. Altogether, her costume bears a strong resemblance to a mushroom, which is a reference to the Quirk she possesses. During the U.A. Sports Festival, Kinoko has her eyes hidden by her front bangs and wears a sullen expression, suggesting that she is very shy. However, Kinoko arrives at the Joint Training Battle alongside her classmates with a big smile, contrasting with her demeanor during the Sports Festival. When her teammate Shihai Kuroiro's plan fails, she excitedly initiates her part of the plan using her Mushroom Quirk, suggesting that her confidence has increased greatly, or at least that she is more comfortable around mushrooms. She enjoys using her Quirk which stems from her gleeful liking for mushrooms. She remembers the scientific name of all the mushrooms she can spawn and happily adds endearing honorifics to them. She also likes to make mushroom puns during a battle. However, she possesses a kind side as seen when she apologized to Fumikage Tokoyami for using too much of her Quirk on him and telling him to take necessary medicine to better himself.