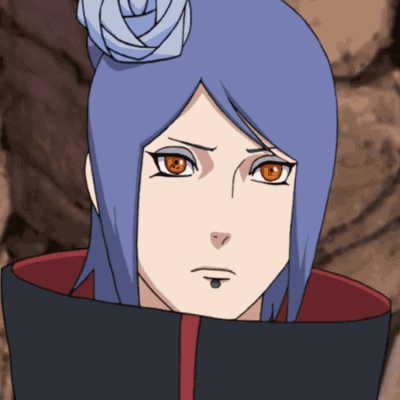 Konan was a kunoichi from Amegakure and a founding member of the original Akatsuki. After Yahiko's death, she was partnered with Nagato, who had since taken control of Akatsuki, and was the only member to call him by his name. After Nagato's death, Konan defected from Akatsuki and became the de facto village head of Amegakure. Konan had short, straight blue hair with a bun, grey eyes (amber in the anime) with lavender eye shadow, and a white (black in the anime) labret piercing. Konan's eyelashes are shown to be a diagonal line at the bottom corner of her eyes, but in the anime, they are shown to be distinctive lines. She has worn a large light blue paper flower clipped on her bun since she was a child. Her facial expression was usually neutral, though usually protested or looked worried when Nagato performed a technique that would debilitate him. She wore the Akatsuki cloak and her Akatsuki ring on her right middle finger, the kanji on it meaning "white" (白, byaku, haku). She also wore orange nail polish. Although she never removed her Akatsuki mantle, it was revealed[12] that underneath it she wore a revealing navy blue robe, with a large hemline on the front, and exposed her arms, her back, the lateral part of her breast and her belly, with her navel being surrounded by four more piercings. It was also revealed that her headband is on her right hip; instead of the standard sandals and leg-warmers, she wore a pair of blue pants that also functioned as her shoes, with white high heels, inverting the organisation's standard colour scheme. As a child, Konan was seen wearing an array of simple clothing. When living with Jiraiya, she was seen wearing a karate top and skirt bottom, with a pouch she wore at the front of her outfit to carry her paper. When Konan, Yahiko, and Nagato began to make Akatsuki, Konan wore a black cloak with purple stockings and high heels, as well as a midsection guard, and an Ame forehead protector, that being the only time period Konan's been seen wearing one. Konan was smart, stoic, calm, and level-headed much like her partner, Nagato. As a child, she was bright, compassionate, and relatively cheerful, in comparison to Yahiko's tough attitude and Nagato's sensitivity. However, the traumatic events since then have led her to become a very serious person, and she never spoke during Akatsuki meetings. Nevertheless, she has always placed the safety of her team-mates above her own. Konan had romantic feelings towards Yahiko, which were reciprocated. She did seem to be more empathetic than most other Akatsuki members, as she appeared sad whenever she was reminded of her past. She also expressed a great deal of loyalty and courtesy to Pain, doing his bidding without question, looking out for his well-being and always having complete faith in his abilities. She acted as an intermediary between Pain and Ame, the villagers having given her the title "God's Angel", because with her paper wings activated, she resembles one. She had the ability to read Pain's emotions without him facially expressing them, presumably as a result of having known him for so long. As soon as Tobi ordered Pain to capture the Nine-Tailed Demon Fox, she could tell right away that there was something about the order that very much upset her emotionally deadened partner. After Nagato's sacrifice, Konan becomes fiercely adamant to protect Naruto Uzumaki, the person Nagato entrusted his mission of world peace to, even going as far as to proclaim all of Ame's loyalty to him. She was equally fierce in defending Nagato's remains from Tobi going as far as to prepare herself for suicidal attacks against him if it meant protecting Nagato and Naruto from him. In the anime, Konan was shown to be more of a realist than Nagato, as Tobi stated he did not expect Naruto's arguments alone would be enough to turn her against Akatsuki, which she further elaborated when she compared Naruto to Tobi and realised Naruto is light personified while Tobi was darkness personified. Like Nagato, also she also regained her high regard for Jiraiya because prior to her fight with Tobi, she reminisced about her time with Jiraiya.

No images found
Want to see more from the gallery? Register or Login
piercings ninja