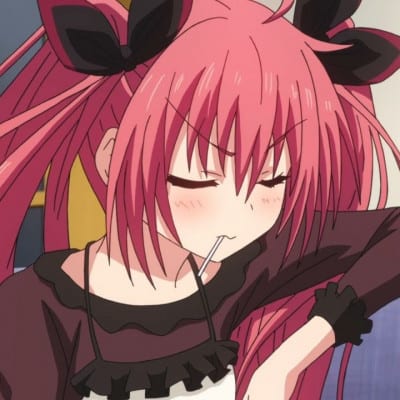 Kotori Itsuka is one of the main female characters of the Date A Live series. She is Shido's foster sister and secretly works as the commander of the <Fraxinus> airship. She is considered the fourth Spirit to appear, as her powers were not revealed when she debuted. Kotori is a cute middle school girl with red eyes and very long, light coral-colored hair that is usually tied on both sides with ribbons in a variety of colors called the twintail hairstyle. She also has an Anime antenna hair that always sticks out on the top of her head. Usually, she can be seen with her favorite Chupa Chups lollipop stick hanging from her mouth. She is 145 cm, and her three sizes are B72/W53/H74. While wearing white ribbons, Kotori usually wears her school's signature white uniform with a black tie, a short teal-colored skirt, and long black stockings that reach up to half of her thigh. But when she wears black ribbons, her clothes and personality change, as she tends to wear maid-like sleeve clothes, with a black skirt and stockings. In 'commander mode', Kotori wears black ribbons. To go along with her position as the commander of the Fraxinus, she wears a red coat over a white uniform like a cap, a black tie with red sidelines, a red skirt with white cloth-like sticking out and a pair of long, black boots that reach up to half her thigh. Her coat is usually draped over her shoulders, but she wears it properly during formal meetings. After the events of Tohka Good End, she begins wearing both her white and black ribbon at the same time. Kotori's Astral Dress is a white kimono resembling a goddess's robes from Japanese folklore, with a revealing neckline, a translucent sash, and her black ribbons tied around a pair of oni-like horns, leaving her hair to fall freely. The ribbons also gain gold flower patterns on them. Kotori has three different personalities depending on the situation at hand. As a human, her character changes according to the color of the ribbons she's wearing. While wearing white ribbons or not wearing any, she is that of her "weak self", a delicate little sister who is very dependent upon her big brother; and when wearing black ribbons, she becomes her "strong self", a charismatic and sometimes domineering leader able to successfully command the airship, Fraxinus. The personalities are considered “little sister mode” and “commander mode” respectively. According to Reine, the Kotori with white ribbons is the one that can honestly say how she feels, which would mean that the Kotori with black ribbons is only putting a strong front because the situation requires so. In her Spirit form, Kotori acts the same as her ribbons' current color indicates. But if she stays in her spirit form for too long, her third, "Spirit personality," takes over and she becomes an aggressive and merciless killing machine, who only cares about battling enemies to death. It could be said that fighting strong opponents (and utterly destroying them) is her only interest. She is best described as a sadist when in this state. In all three cases, Kotori seems to have an 'S' side. Also, her deep feelings for Shido are always present, regardless of her current personality and help her remember who she truly is. No matter what the situation is, she will always be Shido's little sister.