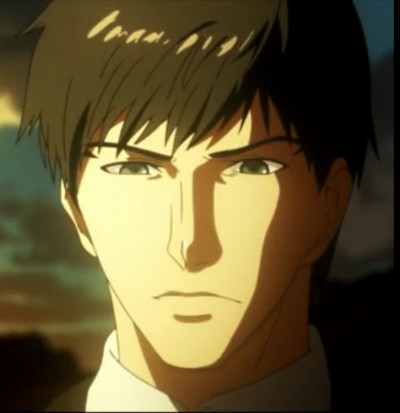 Koutarou Amon is a former First Class Ghoul Investigator. He was Kureo Mado's last partner and his last partner was Akira Mado. He was subsequently declared dead by the CCG, though his body was never recovered, and was posthumously promoted to Special Class for his distinguished service. During the Rushima Landing Operation, he reappeared alive as an artificial one-eyed ghoul. Amon is a very tall, handsome young man with black hair and teal eyes. His distinctive eyebrows are curved at the end. Due to his constant, vigorous training, he has an extremely athletic and muscular build. Like most ghoul investigators, Amon usually wore a black suit with tie. If he left for an investigation, he additionally wore a white overcoat on top of his suit. He also wears a silver necklace with a cross. Years later, he wears a cloak with a hood, and an outfit with a high collar underneath. He possesses a kakugan in his right eye. His right forearm and hand is made from a kagune, the hand itself deformed with only three fingers and a blade-like extension growing alongside the finger on the right side of his hand. After his right hand is destroyed in battle, it regenerates with four fingers, sans blade-like extension. One month after the Rushima operation, his right hand regenerates with five fingers. Due to a personal experience as an orphan during his childhood, Amon came to the conclusion that the world was wrong, therefore he made it his task to change it. Because he believes it is ghouls who are twisting the world, he views their eradication as a way to mend it. After being spared by Ken Kaneki, Amon started to question the righteousness of his crusade and showed interest and curiosity, wanting to understand the ghoul. At heart, Amon is a likable, sympathetic young man with a great sense of justice, dedicated to his cause. So much so that he views his morality as anything done in the name of justice.