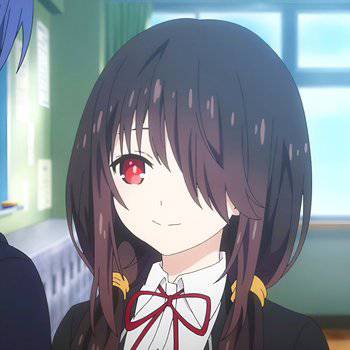 Kurumi Tokisaki is the third Spirit to appear. Due to her brutal actions, she is referred to as the Worst Spirit. She is also the first Spirit to appear as an antagonist in the Date A Live series. Kurumi is "a girl with astonishing beauty" as described by Shido Itsuka. She appears to be elegant and has very polite manners. She has ivory skin and long, black hair usually tied in long twin tails. Her right eye is red-tinted while her left eye appears as a golden, inorganic clock face. The positions of the clock hands represent her remaining "time" and are covered by her bangs, which are only revealed when she transforms into her Spirit form. The Astral Dress, which Kurumi wears, is made out of crimson and black frills, giving her the appearance of an elegant Gothic Lolita with uneven twin tails. On her head, she usually wears a big crimson net bow to hold her hair. She also wears a red and black collar on her neck. Kurumi's height is stated to be 157cm, and her three sizes are B85/W59/H87. When not in her Spirit form, Kurumi usually tends to wear either the female winter uniform of Raizen High School or a black Gothic Lolita dress. Kurumi is a person whose character is difficult to read. She possesses a dislike of humanity that borders on mistrust, which is something that she shares with most of the other Spirits in her debut. She is a skilled actress as she is capable of putting on the facade of an innocent, curious young girl when she needs to. This skill of hers is shown when she registered as a student at Raizen High School and spoke in a polite manner. However, under that mask lies a mad woman, prone to fits of insane laughter and possessing no regard for human life, viewing them as a food source to restore her own time, and thus, a disposable commodity. There is a twisted justice behind her methods, however, as the people that she brutally murdered were would-be rapists and animal abusers. Also, a good sign of her sense of justice lies in her ultimate objective: to go back in time, kill the First Spirit, prevent the spacequakes from ever happening and saving millions of lives in the process. This goal made <Phantom> call her a kind person, albeit sarcastically. In hindsight, Kurumi possesses some degree of innocence that her psychotic behavior has not entirely ruined; she has a soft spot for small animals and other creatures. She once slaughtered four humans not because she needed to replenish her time, but because they were trying to kill a kitten. She also appeared to have some desire for a normal life, a chance at redemption, as Shido was able to speak with one of her many timelines and nearly convinced her before the true Kurumi interrupted. However, despite the fact she doesn't kill without a reason and her redeeming qualities, Kurumi doesn't seem to think of herself as a great person and even appears to hate being called one. When Shido stated that he would not give up on her despite her being a murderer, she responded by using her City of Devouring Time on the students of Raizen High School. She even summoned a spacequake which could have killed them all, in an attempt to make him give up on her. Also, when <Phantom> called her a kind person, Kurumi's initial response was to try to shoot her. Her ability to summon shadow clones of herself from other timelines adds even more complexity to her character. The clones are essentially herself, which means they have the same personality, but they also have free will to an extent, even if they share memories, goals, fears, and obsessions. It is also hinted that the experiences each clone possesses affect the main one since, after helping Shido locate Tohka (so that Kurumi could track the Second Spirit) and parting ways, Kurumi was shown talking to her clones and was happy because she had received a pat on the head from Shido. Some of her clones also slightly reflect what her former personality was; the clone that Shido faced on the school rooftop nearly agreed to let Shido save her, and the clone from Kurumi Star Festival (the very same clone Shido reasoned with on the school roof) was very cheerful and became slightly emotional when saddened. Kurumi appears to have a particular liking for cats, as shown by her brutally murdering a group of men who were shooting at one with pellet guns. In an Omake, it is shown that she can be quite embarrassed about this. When Shido and Tohka caught her, she ended up going so far as to have one of her clones pretend to be the real her and "dispose" of her so that she could get out of the situation without ruining her reputation. Before becoming a Spirit, Kurumi had a strong sense of justice. While lamenting about the inequality in the world, she always possessed a strong desire to help those in need. This trait was considered both pure and naive, the latter of which Mio took advantage of to trick her into becoming a Spirit that hunted down other Spirits that were incompatible with their Sephira Crystals. As a verbal tic, Kurumi has a habit of saying "Ara, Ara" when particularly amused by something. Additionally, Kurumi also has a distinctive "Kihihihihi" laugh.

No images found
Want to see more from the gallery? Register or Login
heterochromia gothic lolita