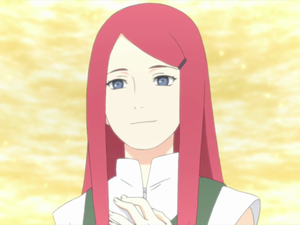 Kushina Uzumaki was a Konohagakure kunoichi who originated from Uzushiogakure's Uzumaki clan. She was the second jinchūriki of the Nine-Tails. Kushina was well-known for her beauty. She was a fair-skinned and slender woman of feminine build with violet eyes, and the common Uzumaki red hair. Her hair was straight and reached her ankles (thighs in the anime) with shoulder-length strands that framed both sides of her face and a black clip that parts her hair to the left. Generally, she wore a high-collared, sleeveless blouse under a long, loose-fitting dress with a wristband on her left wrist and standard shinobi sandals. While her style of clothing normally consisted of this, she has been seen wearing it in varying colours. While on duty, she wore a blue forehead protector with her hair tied up in a high ponytail and strands at the sides of her face. Her attire consisted of a standard Konoha flak jacket over a black short-sleeved shirt and black form-fitting pants that reached her calves. In her childhood, she had a round face, which, with her red hair naturally framing both sides of her face, giving her the resemblance of a tomato. Her attire was a sleeveless kimono-style blouse that was yellow in colour and held closed with a green obi over a short-sleeved mesh shirt with a pair of dark blue shorts and brown shinobi sandals. In her adolescence, she wore a short-sleeved, tan kimono-like blouse with a dark embroidered border, held closed with a black obi, a dark short skirt and stockings that stopped at her thighs along with the village's forehead protector and brown sandals. In her childhood, Kushina was a headstrong, impulsive, eccentric, and stubborn girl. According to Jiraiya, Kushina was also talkative and tomboyish. Tsunade noted that much of Naruto's personality, as well as his ninjutsu style were inherited from her. Kushina also had a verbal tic: when flustered or excited, she would end her sentences with "(da)ttebane" , a trait she hoped wouldn't be passed down to Naruto (who also uses "you know", or "(da)ttebayo" and her grandson (who uses "dattebasa"). In the anime, it is shown that these traits are also how she hides her insecurities, such as having red hair, being a foreigner, and being Kurama's jinchūriki, along with being somewhat nervous. As an adult, Kushina was very level-headed and cheerful with a noticeable sassy side to her. Despite her calm and kind nature, she retained her quick temper from childhood and occasionally lashed out violently at others if they angered her, something that even she finds off-putting. She also was fearless, as her friend Mikoto was slightly surprised when Kushina showed anxiety over labour pains. Kushina was prone to worrying about her husband and unborn son, showing strong maternal instincts as she correctly predicted her child's future personality and gender well before giving birth. In the anime, possibly derived from her over-excited personality, Kushina is shown to be a selective hearer. Kushina deeply loved her family and was not afraid to sacrifice her life to stop the Nine-Tails, even taking the fox's deathblow meant for her newborn son. Though afraid of the harsh and cruel life Naruto would have to endure as an orphaned jinchūriki, she did as much as she could in her final moments to shower her son with love. She also cared deeply about Minato's students, thinking that Rin Nohara was adorable and would often hug and kiss her on the forehead. She also had friendly fights with Obito Uchiha, her favourite according to Minato.