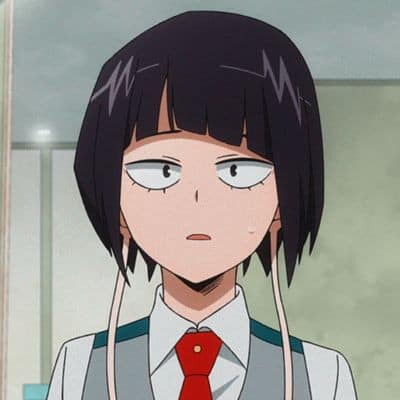 Kyouka, also known as the Hearing Hero: Earphone Jack, is a student in Class 1-A at U.A. High School, training to become a Pro Hero. Kyoka is a petite, fair-skinned girl with a slender build. She has triangular, lazy-looking onyx eyes with notably long lower eyelashes, and rather small eyebrows. Her hair is short, only around chin length, and is dark purple in color with an asymmetrical fringe, two lighter streaks shaped like sound waves on either side of her head. Her most prominent features are the flexible, plug-like earphone jacks hanging from each of her earlobes at the end of two thin cords, which act like extra limbs; she seems to be able to control these at will, and they are very flexible, able to change length if so desired. Unlike the other students, Kyoka sometimes wears a waistcoat over her school uniform, in place of the usual U.A. blazer. Kyoka has a pragmatic, unenthusiastic and teasing personality that is mostly shown to those she finds irritating, like her fellow classmate Denki Kaminari, whose cluelessness makes him an easy target for her snarky comments. Kyoka is not always like this though, as she does enjoy socializing with others, in which case she is usually nice and friendly. Kyoka often gesticulates through her elongated earlobes in place of her hands. She can also be quite aggressive, evidenced when she uses the Earphone Jacks her Quirk provides to physically punish people when provoked, or to keep them in line, most notably Denki and Minoru Mineta. During hero activities, however, Kyoka prefers smarter approaches, usually by coming up with a plan herself. She is surprisingly organized and makes sure to convey her ideas in a way that's easy to understand.