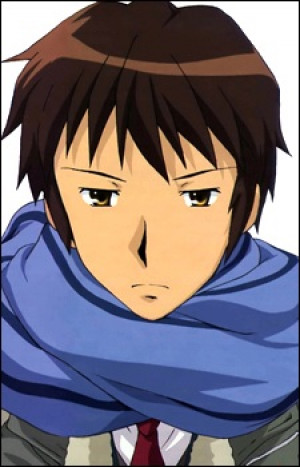 Kyon is the main protagonist of the series and primary narrator. He is the second person to join the SOS Brigade, and unintentionally gave Haruhi Suzumiya the idea to form the club. He is the "fourth seat" of the group. Kyon is the only member of the group who is "normal", having no special abilities at all. Kyon is enrolled in North High, and his real name is unknown. His nickname, Kyon, was created for him by his aunt and then spread by his little sister. This is an "unwelcome twist" on his real name. He sometimes feels that having Mikuru, Nagato, and Koizumi in the club is what makes being in the club worthwhile. Kyon's most obvious characteristic is his snarky and cynical manner, which he often uses to hide his true emotions. This results in contradictions between his stated desires and his actions, which he usually rationalizes by claiming that he was coerced into his own actions. For example, he outwardly presents himself as a skeptic, always arguing in favor of the most mundane possibility in any situation, and claiming that Haruhi forced him to join the SOS Brigade, but confesses in the opening narration of The Melancholy of Haruhi Suzumiya that he wishes extraordinary things existed. As he stated in "The Day of Sagittarius", he seems to naturally stay in the absurd environment of the SOS Brigade. At the time he claimed this proves his adaptability, but in The Disappearance of Haruhi Suzumiya he realized that he enjoys being in a group where strange things happen. Likewise, he rarely admits to fondness for any person, even mentally referring to his friends Kunikida and Taniguchi as idiots. In at least some cases his snarky commentary on the people who are closest to him seems to stem from either force of habit or momentary frustration rather than an attempt to hide his feelings; his narrative continues to include remarks professing a complete disregard for Haruhi even alongside the occasional admission of his fondness for her. He is a normal student but time traveled with Mikuru in Bamboo Leaf Rhapsody and The Disappearance of Haruhi Suzumiya. In The Disappearance of Haruhi Suzumiya, it was thought that he transcended dimensions of reality or timelines, although he has no abilities or special technology. It was later revealed that Yuki used some of Haruhi's reality-warping abilities to completely rewrite the world. Kyon is intelligent and perceptive enough to solve the mystery in Lone Island Syndrome. However, he does poorly in school, at least in part due to a lack of willingness to study. He often states that he doesn't understand Itsuki's and Yuki's explanations, but he is able to easily understand the general sense of the paranormal situations. He finds himself feeling out of place whenever put into a supernatural situation such as the closed spaces in Mystérique Sign and The Melancholy of Haruhi Suzumiya Part 6 or when placed into the rewritten world in The Disappearance of Haruhi Suzumiya, claiming he has misfortune since he is the only "normal" one in the SOS Brigade.