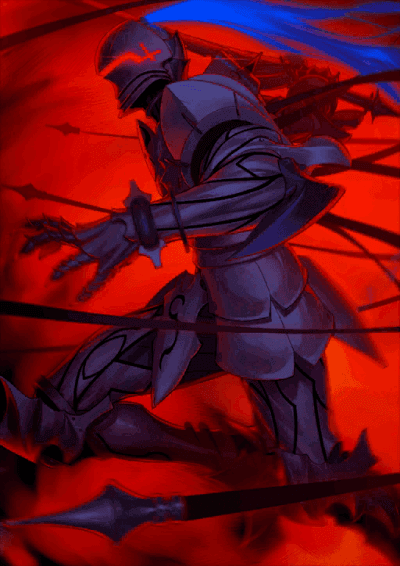 Lancelot, Class Name Berserker is the Berserker-class Servant of Kariya Matou during the Fourth Holy Grail War of Fate/Zero. He is one of the Servants of Ritsuka Fujimaru of the Grand Orders conflicts of Fate/Grand Order. Berserker is a robust man fully clad in pitch-black armor and a rustic helmet with a thinly carved slit displaying the ghastly glow of his eyes. The armor is the work of the delicate and nuanced workmanship of its smith's utmost effort, succeeding in granting it an air of formidability and a fine construction. It is a perfect armor that can be called neither exquisite nor crude, and it instead perfectly melds magnificence and functionality. It is carved with countless marks and scratches, the highlights of his various military exploits etched into it to add a touch of valor. It is an ideal battle outfit that all knights could not help but envy. During life, he was an ideal incarnation embodying the true face of a "knight." Having lost his distinguished dignity of the past, he has been thoroughly changed by his descent into madness. Mad Enhancement and his anger have corroded him into his pitch-black form. He has a blackened face, the visage of a living dead man who has lost everything to a curse. He had a beautiful visage capable of drawing the admiration of many women, but his hatred has made him gaunt and pallid like a phantom. The only part of him filled with light is his eyes that are filled with hatred. He retains his normal appearance while not under the effects of Mad Enhancement. Due to For Someone's Glory, the identifying marks of his armor are hidden, only revealing the fact that he is fully clad in armor without any opening. It shows no ornaments or polished luster like that of Saber or Gilgamesh. Blurring the characteristic features and clues on the lineage of the maker, it makes him look like a "shadow", a bottomless black darkness like Hell. Once the ability is removed, the armor is easily identified as that of Lancelot. He lacks the radiance of Heroic Spirits, the "shine" that is the expression of their pride. There is no sign of the honor of his legend, the essential element of Noble Phantasms. This makes him closer to Assassin in nature, holding a "negative surge" like a vengeful spirit rather than a Heroic Spirit. As Berserker, his mind is under the effects of Mad Enhancement, limiting his rationality and ability to think. He gives off nothing but murderous intent and the thirst for blood, his deep hatred radiating out from him enough that he can easily be sensed even when he is hidden. He is able to battle with finesse due to his martial prowess, and he shows the ability to recognize that Lancer has been ordered to help him and take him as an ally for a short time. He still recognizes his King, instantly becoming hostile towards her and forgoing any orders in order to fight her. He growls parts of her name, a moan full of malice hardly resembling human speech. Lancelot was known to have extreme loyalty to his King during life as one of the people she considered to be a friend. She believes, even after their armies had clashed, that their hearts should still be the same, as a subject upholding the way of the knight and a king upholding the way of the knight. Saber is shocked in his ability to manifest as Berserker, that he who was the subject of people’s admiration could be reduced to that state. She cannot help but think their eternal partnership was nothing but a naive fantasy onto which she had clung upon seeing him in that state. In one sense, he can be said to be a victim of Saber's righteousness. Saber believes the root of it to stem from her hiding her gender. Seeking punishment for his actions, he was forgiven by the one person who he desired it from the most. The wretchedness he felt from that simple act was overwhelming for him. His guilt weighed down on him the more he adored his king, so his only salvation became to personally bring about her downfall. The atrocities he committed were of an insane and irritable young man, but ultimately driven by his overwhelming love for his king. He hated that she could remain an ideal king even after learning about the affair, and lamented how his king sacrificed herself for the sake of her country.