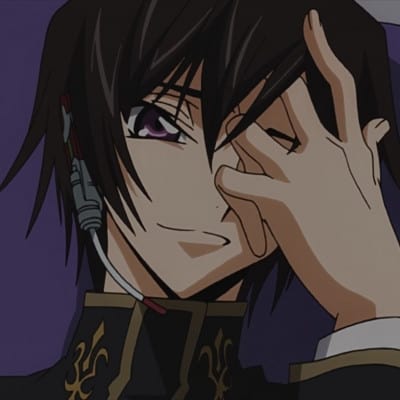 Lelouch vi Britannia is the main protagonist of Code Geass: Lelouch of the Rebellion and Code Geass: Lelouch of the Rebellion R2, and plays a supporting role in sidestories like Code Geass: Oz the Reflection and Code Geass: Lancelot & Guren. After he was exiled, he used the alias, Lelouch Lamperouge. He was the Eleventh Prince of the Holy Britannian Empire and the son of the 98th Emperor of Britannia, Charles zi Britannia. He was also the leader and founder of The Black Knights and the real identity of Zero. He is voiced by Jun Fukuyama, while his child self is voiced by Sayaka Ohara. His English dub voice is provided by Johnny Yong Bosch with Michelle Ruff doing Lelouch's child voice. He was chosen the most popular male character of 2006, 2007 and 2008 at Animage magazine's annual Anime Grand Prix. His Japanese voice actor Jun Fukuyama also won the "Best Actor in a Leading Role" award for his portrayal of the character at the first Seiyū Awards in 2007. Lelouch is a handsome young man with black hair and violet eyes, which he inherited from his mother. Lelouch is somewhat scrawny, having little muscle, and like most characters in the series, is rather thin. In spite of this, Lelouch is considerably tall, standing at least a head taller than Kallen, and apparently being slightly taller than Suzaku. Lelouch usually wears the Ashford Academy uniform, or the Zero uniform. Outside of Ashford, his primary casual outfit is a red jacket with a black shirt underneath and grey trousers, though he has occasionally worn other clothing. As Emperor, he wears a white robe with gold accents and a matching hat; both sport a red eye motif, referencing his Geass power. Lelouch is a highly intelligent individual who is also calm, sophisticated, and arrogant due to his aristocratic upbringing. While at school, Lelouch conducts himself as a sociable, likable, and often easygoing student. However, this is really a mask to hide his true nature. While as Zero his true nature is expressed. His charisma and beliefs in justice gain him the trust and respect of many soldiers and leaders. Lelouch is known for having a very stoic personality. He never cared about schoolwork, seeing the entire thing as trivial, even though his high intelligence would make it easy for him. At one point, Shirley stated that if Lelouch applied himself in school, he could get high grades. He enjoys seeking out challenges, often playing chess against the nobility. In general, Lelouch takes most day-to-day affairs with open disinterest, often not even noticing the affection of others, especially Shirley, his classmate. He has a strong dislike for nobles, viewing them as tepid and "overprivileged parasites." In battle, Lelouch is very cold and tactical. He is willing to sacrifice civilians and soldiers alike, if that is what it takes to achieve the objective. In the battle at Narita, when he created a landslide that wiped out most of the enemy forces, and indirectly, several civilians in the town below, he brushed off the civilian casualties as a simple "mathematical overestimation." He did have second thoughts when he learned that one of them was Shirley's father, but he accepted that there will always be consequences for all of his actions. He also saw no problem with collapsing a large portion of Tokyo, resulting in countless military and civilian casualties. Many characters have noted that Lelouch is quite selfish, as his desire to remake the world into what he wants it to be comes from his desire to avenge his mother's apparent death and Nunnally's sake, however in time he realizes that this goal is not just for them, but for the entire world. Despite his cold, calculating demeanor, and ruthlessness in battle, he can be a rather compassionate person to his friends and loved ones. To Nunnally, he is a loving older brother, and to Suzaku, a loyal friend, despite the fact that the two are enemies. Lelouch, at first glance, seems to have relatively little concern for the well-being of his subordinates, but in reality, he does care about them, seeing them as valuable allies. Though he has shown preference on occasion especially with Kallen. As the series progresses, Lelouch suffers traumas and further loses that further deepen his resolve. However, he also grows less merciful to his enemies if he cannot Geass them.