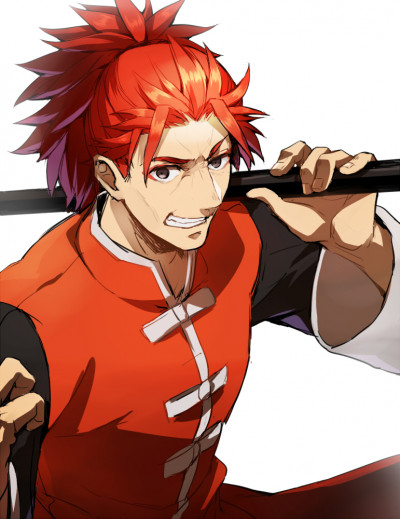 Li Shuwen, Class Name Assassin, is the Assassin-class Servant of Julius B. Harwey in the Moon Holy Grail War of Fate/EXTRA. He later switches classes to Berserker due to the unusual circumstances of his Master. His primary class is listed as Berserker for Fate/EXTRA Last Encore, but it is revealed to be similar circumstances to those of Fate/EXTRA. In his youth he has long tied back red hair. He also wears traditional Chinese clothing. Hakuno describes him to be a sinister man with piercing eyes whose clothing looks aflame. In his older days, he has short gray hair, he wore a tan coloured Chinese clothing. He wore a fur long coat over his shoulders. While making the original design, Takashi Takeuchi also drew an older version much like how he is said to appear when summoned as Lancer. A master of martial arts who fundamentally keeps the morality of the innate goodness of man, but at same time also accepts evil. As a Servant, Shuwen's morality had deviated from the general common sense, but his humanity itself is that of a "sensible person" that esteems rationality. He does not see great difference in justice and evil, but if someone's behavior offends his rationality, he will bring swift and inevitable death. At a first glance this would seems as an act of chivalry, but since the chivalry of China is "pick up a sword out of passion", his way of thinking is the exact opposite. Rather than rational, Li Shuwen's character is something better described as being close to that of modern people. Li Shuwen was someone who simply (not purely) sought for strength, but it has been said that, in his late years, he discovered the valor of the strength of conviction, one's way of life, instead the strength of violence. He acknowledges that he is a kind of professional killer rather than a martial artist, but that is neither a self-depreciation nor a boast. Given that he often learned, often fought and often murdered in his previous life, he really does not carry any regrets or grudges. Since he was summoned as a Servant, he swings his wicked fists as the concealed weapons of his master Julius without hesitation. He starts to find the Holy Grail War enjoyable as Hakuno and Hakuno's Servants manage to survive his attacks. Making conversation and getting to know the opponent is the ultimate luxury to him. He believes that Martial Arts is to fight on one's life, with the weight of years behind one's fist. The opportunity to crush each other's lives is rare for him. He is very compatible with his master Julius and he is grateful to be summoned by him to fight once again. Assassin is prideful, serious, and energetic when fighting in battle.