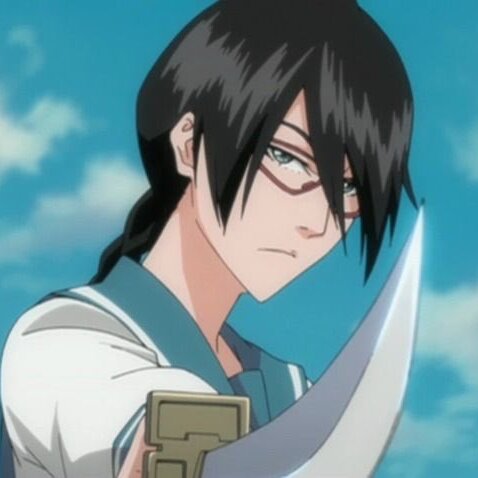 Lisa Yadōmaru is a Visored and the current captain of the 8th Division. Her Lieutenant is Yuyu Yayahara. She is the former lieutenant of the 8th Division under Captain Shunsui Kyōraku. Lisa's appearance is of a young adult woman with turquoise eyes, red oval glasses and long black hair. Her hair has bangs in the front and she keeps the back in a braided ponytail. She dresses in a long sleeved sailor fuku, with a teal green/blue collar and matching pleated miniskirt that ends at her stomach, completed with a pink neckerchief. (In contrast to the Western-style uniforms worn by the students of Karakura High School). During her time in Soul Society she wore a variation of the standard Shinigami robes. She wore a shortened hakama resembling a skirt. Her hair was in two braided pigtails though slightly shorter and was much more well kept with straight bangs. She also wore red squared glasses as opposed to the oval ones she currently wears. Seventeen months after the war against Aizen, Lisa's hairstyle is changed, now tied back into a high, shoulder-length ponytail with chin-length bangs on either side of her face. Ten years after the defeat of Yhwach, she returns her hair to a braided ponytail. She also wears a standard captain's haori, with her Shinigami robes altered to show her midriff. In comparison to her comrades, Lisa is one of the calmer, more sensible members of the Visored, showing a quite stern, detached and secretive demeanor at most points, although she is somewhat temperamental and easily irritable. Her hobbies include reading erotic manga (specifically, josei genre) or swimsuit magazines, which she often lends to her fellow Visored, including Love and Ichigo (who denies it). She is also very curious, and had a habit of spying on the captain's meetings during her time in Soul Society. Despite her rather distant personality, she appears to care about her fellow Visored, as shown when she warned Kensei about an attack from a Hollowfied Ichigo. She has shown to have a playful side similar to her former captain, Shunsui Kyōraku, as the two were close and shared in mutual advances toward each other.