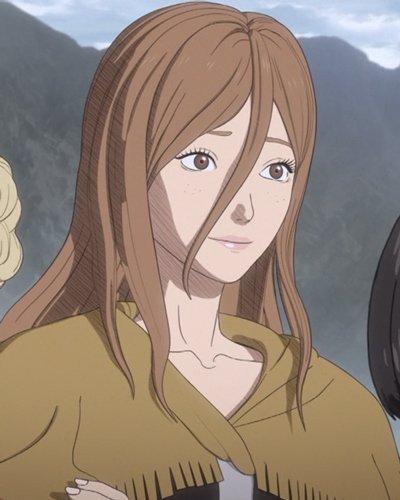 Luca is a minor protagonist. Once a refugee in Albion, she worked as a prostitute there. Currently, she runs an inn in Falconia. Luca is a young woman who has long brown hair that she parts down the middle, though she often allows a single lock of it to fall across her face and to one side of her nose. While in Albion, she was most usually seen in a simple apron dress, but upon becoming an inn owner she has updated her wardrobe for a more regal-looking dress that is similar to her initial outfit. Luca is a kindhearted and playful person who, due to the positions and environments that she places and finds herself in, refused to lose her nerve not to be like those she looked down upon. She acts as a mother figure toward her four protégées - Pepe, Fouquet, Lucie, and especially Nina. Though feeling they should work while under her care in exchange for ensuring their survival, she provides them with genuine affection. In addition to this, Luca is also protective of Casca, whom she met while on her way to Albion and took under her wing, knowing that the demented girl could hardly fend for herself. When Luca's affection for those under her protection was put to the test, she refused to abandon anyone and was willing to sacrifice her life to give them a chance at survival, always speaking out her mind. Even in bleak situations, Luca tends to show an optimistic side, but she does ponder whether she's being foolish in her acts. She admitted not being good when it came to admit her own faults. In addition to this is Luca's skepticism. Through her interactions with Jerome and Guts, she displayed an unwillingness to take their words as absolute truth, and she only accepted them after getting proof of both of their claims (Jerome's devotion to her, for which he risked his life and career; and Guts' being familiar with Casca, proven in that he knew her real name and bore the same mark on his neck that she had on her chest) before they fully earned her trust. Among Luca's other traits are her sensitivity to other people's personal hardships, which allowed her to empathize with both Nina and the egg-shaped apostle, even if she considered that being overly maternal was a bad habit of hers. Of note is her imaginativeness, which led her to mistake the Skull Knight for Death during their encounter.