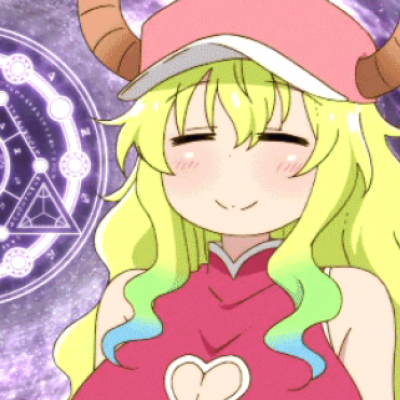 Quetzalcoatl, often referred to as Lucoa, is a supporting character of Kobayashi-san Chi no Maid Dragon and a main protagonist of Kobayashi-san-chi no Maid Dragon: Lucoa wa Boku no xx Desu. She is a former dragon goddess and an old friend of Tohru who was exiled from her seat of goddess after consuming some cursed liquor that led her to enter into a scandalous affair. In her human form, Quetzalcoatl is a tall, fair-skinned and hour-glass woman with enormously large breasts. She has long, wavy blonde hair, in the anime her hair takes on a turquoise and green color at the ends. She has heterochromia, where one iris has a different coloration from the other. Her left eye is navy blue on the outside and yellow on the inside, with a green, slit pupil. Her right eye is green on the outside with designs and black on the inside with a yellow, slit pupil. Although she tends to keep her eyes closed most of the time. Like Tohru, Quetzalcoatl keeps her horns but does not retain her tail, or decides to keep it hidden. When she first arrives at Kobayashi's home, she dons a pink cap, a choker, and necklace (only in the manga), a black tank top that exposes her cleavage and stomach (covers her stomach in the anime), jean booty-shorts that reveal a generous portion of her buttocks (in anime), thigh-high black stockings, and pink shoes. She does not wear a bra, which allows her voluminous breasts to jiggle and bounce without much restraint with every movement she makes, creating a distracting environment to those around her, especially males. However, this seemed to be advantageous as it helped a young boy named Shouta Magatsuchi win a relay race as many of the other male runners were distracted by her breasts bouncing. Kobayashi even comments that her outfit "does not leave much to the imagination." The manga version of her dragon form, she takes the appearance of a large 'amphithere' dragon with broad feathered wings and a mask-like skull. At one point she refers to herself as a 'Feathered Serpent.' She is by far one of the largest dragons. The anime version of her dragon form takes the appearance of a feathered serpent. Lucoa appears to be laid-back and carefree who is rarely seen without a smile. She is wise, kind and nurturing who often has advice for her younger kin. As a former goddess, she is better tuned to human customs, as seen when she explains to Tohru why Kobayashi was not receptive to Tohru's initial cleaning regimen. Despite this, however, Lucoa seems to lack some sense of dignity severely. She is not above using her body as a means of getting what she wants, shown when she attempts to use her alluring figure as an offering to the young boy Shouta into allowing her to stay in his home. Lucoa appears to have a flirtatious nature, shown when she is disappointed when Shouta refuses to lotion her body at the beach, regularly takes baths with him and thrusts her colossal breasts in his face, much to the boy's discomfort. She has no issue with showing off her sensual body, opting to wear a skimpy bikini that barely covered her flesh at all to the beach, and caused her to be detained and forced by a lifeguard to wear something less revealing. A similar incident occurred when she showed up at an anime convention boasting a skimpy string bikini. Lucoa commonly wears skin-tight or revealing clothing, showing off her arousing body. Her sexual nature often has her being compared to a succubus or demon by Shouta and her other dragon companions, such as Tohru. Due to an event when she was a former goddess when she became drunk after consuming a bottle of cursed liquor, she was involved in a scandalous affair and stripped of her godhood. When Tohru mentions said scandalous affair, she is always cut off by a surprisingly flustered Lucoa who is usually very calm and laid-back. As a member of the spectating faction, she does not interfere with any events involving the dragons or gods. She has confessed that she hates conflict so much that she will run away at the first sign of trouble without protecting anyone and then act as if nothing had happened after everything is over; without even caring if any of her friends had died. She is self-conscious of this fact but does not seem intent to change.

No images found
Want to see more from the gallery? Register or Login
heterochromia