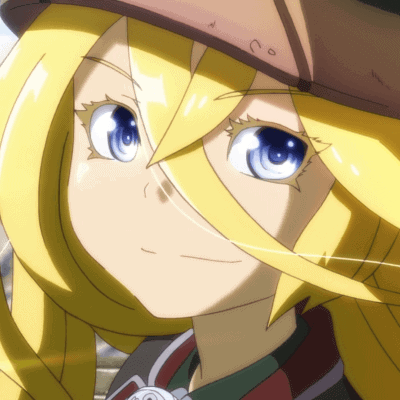 Lyza "The Annihilator" is a legendary White Whistle Delver who accomplished many great discoveries about the secrets of the Abyss. She is known as the Lord of Annihilation for her tendency to exterminate all enemies she encountered within the Abyss, be it dangerous beasts or Delvers from other countries. Lyza is a charmingly beautiful woman with very long, wavy yellow hair with curls at the ends that reaches her knees, large blue eyes, and a light skin-tone. Her attire consists of a modified version of the typical Delver's uniform, with her jacket being of a strong reddish color. Her helmet has two long elegant feathers as well. She is surprisingly quite petite, standing at a shorter height than most adults and possessing a rather small frame compared to most seasoned Delvers. Lyza is described by Jiruo as a fiery and assertive woman, with a love for parties, drinking and fights. She is cheerful, optimistic and carefree, acting impulsively and expressing her thoughts with no filter. Jiruo stated that she had an incredibly unbalanced diet, but the letter of the Abyss left behind by her is filled with recipes and explanations over what creatures are or are not edible, and how to cook them for a delicious meal, suggesting that she was very fond of unique and bizarre cuisine. She was particularly fond of alcohol and spent long periods of time drinking in large quantities after expeditions. Despite her nonchalant disposition, she is exceedingly loyal and deeply concerned with the well-being of her loved ones, going to ridiculous extents to ensure their safety, and prioritizing her family over inconceivable riches or fame. Her biggest love however is arguably the Abyss itself, with an incomparable determination and even obsession to reach its bottom. As such, she more often expressed awe and joy when exploring the Abyss, filled with curiosity and endeavor rather than fear. She was particularly fond of the Garden of the Flowers of Resilience within the 4th layer, claiming it to be her favorite spot in the Abyss. She also seems to have a fascination in the grotesque and bizarre, expressing an almost childlike passion when observing the creatures of the Abyss.