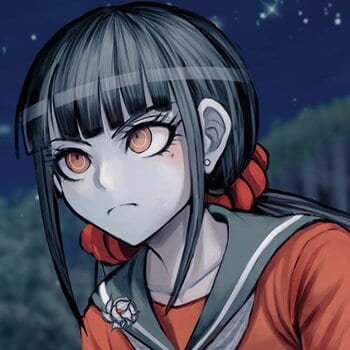 Maki Harukawa is a student in the Ultimate Academy for Gifted Juveniles and a participant of the Killing School Semester featured in Danganronpa V3: Killing Harmony. Her title is the Ultimate Child Caregiver. Maki has red eyes and very long, dark brown hair that she ties into twintails held by two big, red scrunchies. She has straight bangs that hide her eyebrows, as well as two small strands of hair that fall at the sides of her head, the one falling at her right side being a bit longer. She also has a beauty mark under her left eye. Despite having a slender physique, she does possess some muscle and strength. She dons a red sailor-uniform accompanied by matching colored thigh-high socks, a short, pleated black plaid skirt, and brown ankle boots. The scarf on her uniform is a pale pink with a slightly visible star design on it. A pin of her previous high school is on her breast pocket and an emblem at the bottom right of her shirt. Her accessories include a dark grey wristband that looks similar to magnetic bracelets athletes wear, small, silver stud earrings, a white hairpin at the side of her head, and a flower brooch on her right shoulder. In the prologue, Maki lacks her red scrunchies or looped hairpin in her hair. Instead, her hair is tied back into twintails with two simple hairbands, and two straight, white pins on the side of her hair. She wears a double-breasted blue school blazer, with white stripes on her lapels, two sets of two white buttons on her jacket, and a blue-and-white striped tie around her neck. She wears a short, dark, plaid pleated skirt that has a teal overlay. She dons dark blue knee-high socks and dark grey inside shoes. Maki appears to have a very serious personality, as she doesn't really seem to smile much if at all. Despite her cute appearance, Maki is described as a hostile misanthrope of few words. She is very aware that she comes across as unfriendly and prefers to be alone. In general, she dislikes people and thus she is not very cooperative and can be stubborn. She talks very little, so when she does, she states things clearly and she appears to be very confident about her arguments. She is cynical and negative with a sharp tongue and sometimes talks in a cold sarcastic manner. While not the type to assertively act on her own, she is stated to have guts and willing to take action when it suits her. She has no problem blaming Kaede coldly and rudely multiple times. She was also shown to be very openly irritated by people who believe in the supernatural, such as Kaito's fear of ghosts and Korekiyo's seances. She bluntly told Korekiyo that she finds his beliefs stupid right to his face. Despite her distant and unfriendly personality, Maki is good at taking care of others. She is very popular among children, even though she dislikes them. According to Kaede, Maki is actually capable of deep love, something that children might be able to see, explaining their attachment to her. She also shows a more caring side when she accepts gifts and is invited by Kaede to spend time together. Maki doesn't want to alert people around her about her true talent as the Ultimate Assassin, to the point that she always stayed in her Research Lab after the room became accessible in Chapter 2. She does this for the sake of preventing unnecessary shock and panic in the group. She also appears to have trouble trusting others and making friends. At first, the only people she trusted were Kaito and Shuichi, and she begins to open up and develop with their support. As the Ultimate Assassin, Maki becomes much more violent, intimidating, and unafraid to threaten others, demonstrating her confidence in her abilities. She carries a knife around with her (as seen in her sprites), and is shown attempting to strangle Kokichi Oma a few times. At times, she seems downright ruthless and cold. Despite her extreme personality, Maki actually holds deep insecurities due to her past as an assassin. As part of her training, Maki was forced to undergo torture, and stated that she "vomited every day" and "cried every night." According to Maki, she did at one point feel anger and pain for being forced to kill others, until she reached the point where she felt "empty", telling Shuichi that she no longer considers herself human. As a result, Maki's experiences caused her to feel hate for herself, believing she was not worthy of having friends and therefore deciding to distance herself from the other students. However, after befriending Kaito and Shuichi, Maki decides to try and change her perspective, eventually learning to accept herself as Kaito encouraged her to.