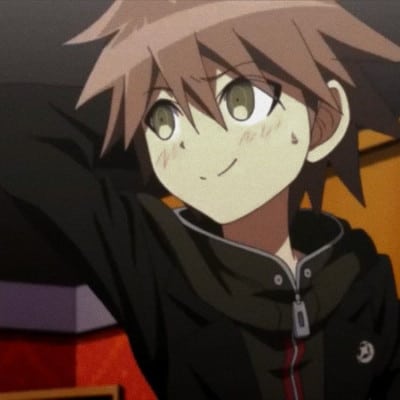 Makoto Naegi, is a student in Hope's Peak Academy's Class 78th, and a participant of the Killing School Life featured in Danganronpa: Trigger Happy Havoc. His title is the Ultimate Lucky Student. Years later, he is a participant of the Final Killing Game featured in Danganronpa 3: The End of Hope's Peak High School with the Future Foundation Directors. At the beginning of the Killing School Life in Danganronpa: Trigger Happy Havoc, Makoto appears to be and believes himself to be a younger teenager, two years of his life having been removed from his memory. He is notably short compared to most of his classmates. He has spiky, desaturated brown hair with a prominent ahoge, and washed-out hazel eyes. He wears black jeans, a zipped-up dull green hoodie with a red stripe along the zipper, an open black jacket with gold buttons, and red sneakers with white toes. Makoto's hoodie has an image of a red gas mask in a circle printed on the back of the hood, and the zipper goes all the way up to the top of the hood. He wears a pin shaped like a four-pointed star overlaying a crescent moon; this is pinned to the lapel of his jacket. After joining the Future Foundation post-Killing School Life, Makoto is seen wearing a black suit. In Danganronpa: Another Episode, his hair is noticeably lighter, longer, spikier, and overall slightly more detailed. In Danganronpa 3, it appears that Makoto had cut his hair, as it is considerably shorter. He also looks more mature, though still has a bit round face for his adult age. After he becomes the headmaster of the new Hope's Peak Academy, he wears a black suit and a beige tie, as well as a dark blue sweater vest with a white shirt underneath. Makoto proclaims himself to be a very ordinary person, to the point that he seems a bit insecure about it. He does admit to having one distinguishing feature, that being his unique sense of optimism. Makoto is very kind, supportive and forgiving, though slightly naive at times. He is friendly, polite and a lot more down-to-earth compared to the other students. These qualities could be the reason he seems to successfully approach and befriend even his most antisocial classmates during Free Time. Junko refers to Makoto as an "herbivore man," which means that he is likely to be the passive one in a relationship, which is reinforced in some of his conversations with others. He is a bit jumpy at times and can be somewhat of a pushover. Despite these meeker qualities, he is capable of being a very determined and charismatic speaker. Makoto is a firm believer in hope, having a positive attitude about the future no matter how bad the situation is in the present. He is also a pacifist, as he tends to believe that violence isn't the answer. While he dislikes despair, believing it to be a corrupting and negative emotion which cannot benefit the world, he is very forgiving toward those who have fallen to despair, believing them to be victims of Junko and not inherently evil. It appears that the only person Makoto genuinely dislikes is Junko Enoshima, the True Ultimate Despair. He considers her his enemy, and blames Junko as well as her avatar, Monokuma, for the deaths of his friends during the Killing Game. However, even in her case, he felt that death wasn't necessary and tried to reason with her when she was preparing to execute herself. Junko refused to listen and executed herself anyway. Makoto is respected by many people as the Ultimate Hope, though he himself is very humble and even a bit embarrassed in regards to the title. In Danganronpa Zero, it's mentioned that he has incredible strength inside, despite often appearing weaker on the outside. During hard times, he is shown to have the power to provide hope for other people and ultimately affect their way of thinking, though this is not always the case as some people refuse to listen to him or simply do not accept his ideals. His title as the Ultimate Hope is but a title, as he is not immune to the effects of the Suicide Video.