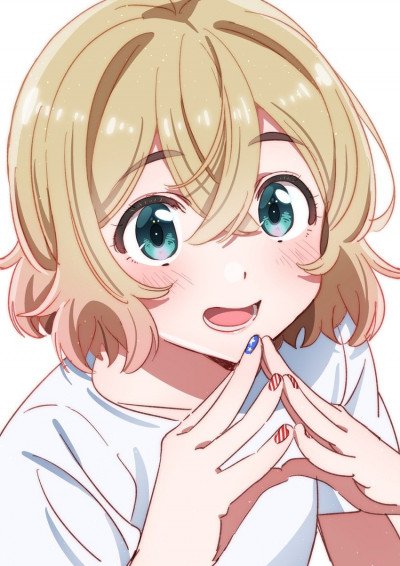 Mami Nanami is a secret antagonist character of the Kanojo, Okarishimasu series. She is a freshman at Nerima University and the ex-girlfriend of Kazuya Kinoshita whom she dumped in favor of someone 'new', thus setting off the main events of the series. Mami is a short, young woman with blonde hair styled in a bouncy bob that has subtle pink highlighted tips. She has bright blue eyes and a small frame with nice and slender legs. Her daily outfit changes from time to time, but usually with light clothing, a purse and a skirt that flaunts her fair skin. Mami is an attractive person, and is certainly aware of it, seeing as she uses it to her advantage. However, she can quickly become self conscious when she compares herself to more well-endowed women. In contrast to her sweet and approachable appearance, Mami can exhibit a cold and frightening demeanor when disgruntled. In this state, she scares away men trying to flirt with her and even causes her friends to pause in bewilderment at her reactions. At first glance, Mami comes off as the type of woman who is kind, caring and supportive of others. In reality, Mami is a sociopathic, selfish, petty and manipulative individual. While she puts on a sweet and friendly facade, she harbors jealous and possessive feelings that scares people and even her friends sometimes. When she is hostile, she will often speak condescendingly in a sweet tone, as seen when she mocks Kazuya Kinoshita's quirks when they were dating at a drinking party. Moments of her true identity are revealed whenever Kazuya is with another girl. She'll do whatever research she needs to get more information out of him and the girl and relentlessly try to pull them apart. She'll make rude remarks about Kazuya while talking to the other girls, or about the girl while talking to Kazuya. It is still unknown whether she does these out of lingering feelings for Kazuya, or if she's just being spiteful and satisfying her own ego. She discovers the truth about Chizuru and rents her using a fake name. In the spin-off series Kanojo, Hitomishirimasu, due to Sumi Sakurazawa's observation, it is revealed that Mami is a maneater, as she is skilled at charming and manipulating men with incredible poise.