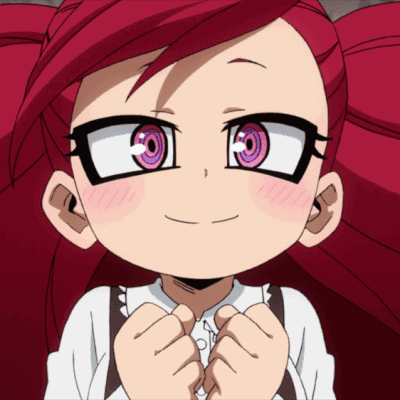 Manami Aiba, also known as La Brava, is a villain associated with Gentle Criminal. She is a side antagonist of the U.A. Cultural Festival Arc. Manami is a very short young woman with quite a large, round head, compared to her narrow body. She has raspberry pink hair, which she wears up in two high pigtails, wide and thick at the top and thinning at the bottom, the ends curved upwards to the sides at her waist, their edges trimmed straight. She has a single bang in the middle of her forehead, swept pointedly to her right, and very large, pointed-down eyes with thick, heavily made-up eyelashes, two longer protrusions to each far side, which take up most of her face. Her irises are oval-shaped, pink in color, and each have two circles between their small pupils and their rims, giving them a rather hypnotic look. Manami’s outfit is quite elaborate, consisting of a big white bow at her neck, matching the thick gloves she wears, an indigo shirt with large buttons and long, upturned frilly sleeve cuffs, and a pair of white, pinstriped pants which are very poofy, making her legs seem bigger than they are. She sports several heart motifs, such as heart earrings, heart-shaped buckles on the two thin, golden belts around her waist, and a wide heart design over the tops of her legs. She also has some dark tights on underneath her pants, over which she wears a pair of shiny high-heeled boots. Manami is a loyal fan and admirer of Danjuro, making sure to record his acts to subsequently post them online, following Danjuro's instructions to interrupt a stream if needed. Despite knowing about his strength and abilities, Manami becomes worried if Danjuro finds himself in potential danger. Manami is in love with Danjuro, as shown through her Quirk, Love.