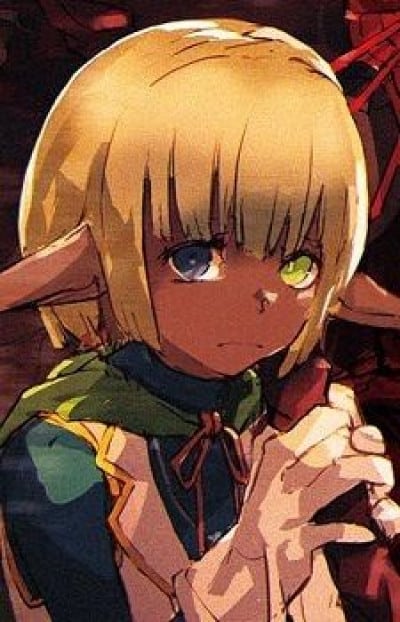 Mare Bello Fiore is a dark elf and one of the twin Floor Guardians on the 6th Floor of the Great Tomb of Nazarick. Mare is the younger twin brother of Aura Bella Fiora. Alongside his sister, he was created by Bukubukuchagama. Mare is a child with dark skin and pointed ears, a signature trait of the dark elves. He has golden hair and heterochromia, his right eye is blue and his left eye is green. He wears a blue dragon scale leather full-body suit, covered by a white and gold vest embroidered with the sigil of Ainz Ooal Gown and a forest green-leaf cloak. Below, he has a matching short white skirt exposing his thighs, and on his neck is an acorn necklace emitting silver light. His slender hands are donned with shiny white silk gloves and he wields a twisted black wooden staff. People outside of Nazarick besides Hilma always mistake him for a girl, due to how he looks appearance-wise and the clothing he mainly wears. Mare has a shy and cowardly personality, the kind which is a polar opposite to his sister, Aura. He often stutters when speaking and maintaining a subservient demeanor during conversations. This, however, is only an outward guise and does not affect his loyalty to Ainz or his ability to carry out his duties, no matter how cold-blooded they may be. Beneath his shy and retiring facade, Mare is capable of showing hostility and determination to those who threaten the territory of the 41 Supreme Beings. Mare likes to sleep all day and is fond of reading books from Nazarick's library, Ashurbanipal, instead of talking with others. He is comprehensive of how his sister feels without her needing to say a word, knowing whether she is having a bad mood or not. He is also appreciative of the time and effort put forth by Ainz's New World followers, showering those like the lizardmen compliments for showing their loyalty to his master with offerings. He also dislikes dragging out conversations with other Nazarick denizens like Pulcinella for too long, seeing that everything the latter tells him is uninteresting. If an opportunity presents itself in the conversation, he would tried his best to hurriedly change the topic of their discussion before it goes on for any longer than it already did. Unlike his sister, who has an interest in collecting beast species, Mare takes a keen interest in collecting plant species. Mare is also observant of his master's movements to the point that he can't help but openly lavish praises for Ainz during their times spent together between them. When Ainz provided his reason for staying with the NPCs, he was shown to appear very emotional and tearful around his master. It was to the point he indirectly got servants of Nazaricks like one of the Homunculus Maids to speak on his behalf while he is crying uncontrollably until Ainz calmed him down. This goes to show that Mare's feelings are relatable and understandable by servants who wish to convey them in his stead. He was reluctant about the idea of executing actions independently on his own without first seeking permission from Ainz ahead of time. He loathes the possibility of being scolded by Ainz by acting against his master's orders unless it is his creator making the decision for him. He was adamant and determined to not let anybody undermine the uniqueness his creator granted to him, going as far as to voice that vow loudly. On the other hand, he would kindly admonish his sister's words if it is out of line especially towards Shalltear. When Mare becomes troubled of what to do on duty while alone, he can't help but express sorrow over it. Wherever there are NPCs like Aura around with him, he would rather consult them to help with completing the task. If he failed to achieve good results from the orders Ainz issued him to do, he would easily get depressed to the point where not even his fellow NPCs could be able to cheer him up except for his master or creator. Bad results of fulfilling his master's orders would make him question his own worth and existence as a servant to Ainz. He dislikes the mere thought of disappointing Ainz who counted on him to do his job correctly without failure. Mare thought about it so much that he tearfully imagined what would happen to him if everything went wrong. Nevertheless, he was very much appreciative of Ainz's willingness to encouragingly guide him on his task every step of the way during their mission together. He felt extremely grateful for the positive words Ainz had given him as wisdom, spurring, and aspiring him to work even harder than before with a newfound resolve and spirit. Simply hearing the gentle words come out of Ainz's mouth was enough to move Mare to tears, crying happily about it because his master did not give up on him.