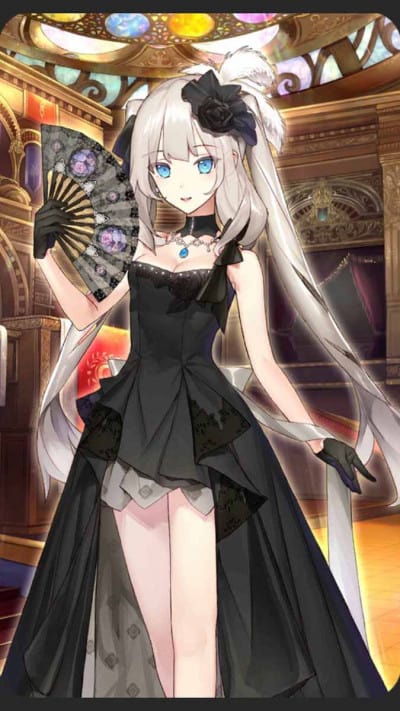 Marie Antoinette, Class Name Rider, is a Rider-class Servant summoned by Ritsuka Fujimaru in the Grand Orders of Fate/Grand Order. Marie is endowed with the greatest body and good looks as the result of her being born so as to become a beautiful monarch that will be loved. Her attire is based on the concept of an "Idol Queen". During the Moon Festival event, Marie commented that in life, no matter how much food she ate, all the food would go to her breasts, making that the more she ate, the bustier she would get. d'Eon then confirmed it and stated through that, her Majesty would grow to have one of the finest bodies in France. An image (idol) from birth. Soothing the masses with a smile, earning adoration with a gaze. Marie was born to be loved, and this is not a theory, but her actually feeling this as an instinct. Finding joy on and accepting the fact that she is an image, she is set on conducting herself just as it is expected of her. Such mentality is already close to some sort of goddess. Marie never hates the people. As she was born to be loved, she therefore loves the people. If the people deem her to be unnecessary, and even if they shout at her, capture her, and kill her, she will smile at them even at the moment of her death. However, her mentality as a Servant have fundamentally stopped at "the moment she married Louis XVI, visited France as its queen, and was loved and blessed by the many citizens", and she does not easily display her aspect as the queen of a tragedy. (It cannot be concluded that she has no memories after the aforementioned moment, but the stage of her character and mentality is simply at "that time".) Honest. Spontaneous. Marie will speak whatever she thought of. She will say the things she likes are what she likes, and the things she dislikes are what she dislikes. Marie loves baths. Similar to and influenced by her mother, Maria Theresa, she awfully loves being clean. That's because, the perfumes she uses aren't that strong (for her, the light ones that are similar to herbs and flowers are good). Marie is a spendthrift. She wastes money on one thing or another as she pleases, and she does not understand even herself about this habit. As the bond with the protagonist (Master) deepens, it appears that she will display the aspect of her tragic side. It is very evident that she is "the very idol that continues to scatter love, yet whose body and mind are scarred." And yet, she still smiles beautifully. Never, will Marie desire for the erasure of the tragedy.