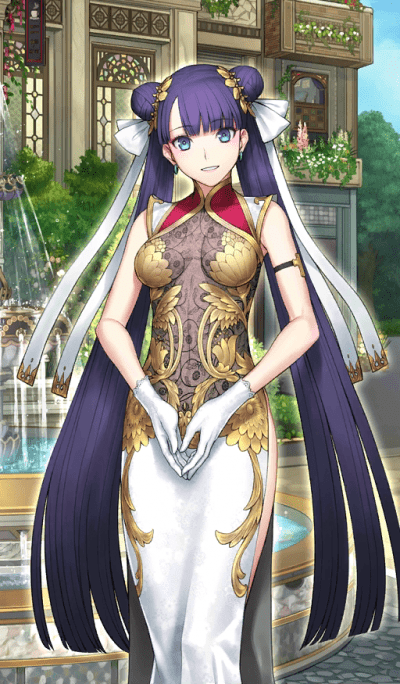 Martha, Class Name Rider, is a Rider-class Servant summoned by Ritsuka Fujimaru in the Grand Orders of Fate/Grand Order. A perfect person, endowed with beauty and overflowing with charm. She is a beautiful saint. Martha has blue eyes and long purple hair, reaching below her waist, with a white, golden-frilled, short veil around her head. She wears a pair of blue earrings on each ear. A short, blue cloak draped over her shoulders is connected to a red collar. Her main piece of clothing is an unnatural one-piece, white dress with red trimmings, with wide sleeves, revealing its interior gray colors and rose-vine pattern. The dress is low cut, with an exposed trim-like section down the middle all the way down to her navel. In the skirt, it is split apart in two points, exposing her legs. A black belt is tied around her waist, connected to a golden ornament by the right hip, which drapes over the remainder of the belt all the way down to her ankles. In addition, Martha wears blue stockings, a set of green and golden gauntlets and grieves, and high-heeled sandals. She holds in her right hand her signature staff: a golden pole with pink strips tied around it and with a silver and purple cross at the very top. In her second Ascension, her cloak changes to red with golden crosses and a chain mail section. The veil is replaced by a set of long, white ribbons tied to both sides of her head, and a new golden ornament appears on her left hip, with yet another belt tied around her waist connecting to it. Her gauntlets are replaced by a silver, more bulkier set, and similar armor pieces are attached to her grieves and feet. In her third Ascension, the golden pieces and belts are removed, and the sleeves replaced by elbow armor. The blue stockings are swapped out by french raspberry ones. The cloths attached to her hips and new set of gloves are of the same color. Said clothes possess white trimmings and crosses. The front section of her dress was removed entirely. The color pattern of her staff changed, the silver and gold were swapped around and the strips went from pink to purple, matching her hair. The woman’s exterior is that of a perfect holy saint. The woman’s interior is also that of a perfect holy saint. A perfect saint both on the outside and in the inside. Perhaps due to the existence of her younger sister, Martha basically displays the words and actions of an elder sister-like behaviour frequently. Kind, chaste, gentle————The saint that is flawlessly radiant. A woman who is reliable, tender on top of that, and holds an indomitable spirit. If she can say, “I’m okay”, her companions will believe that she’s truly okay, no matter what kind of predicament happens, and even if she is getting back onto her feet. Even when everybody receives an attack, and even with a monster raging around, they will embrace that sanctity. The perfect holy maiden. Although then however————to her companions who she can particularly confide in, Martha displays a different facial expression as a saint; especially around those she grew close to, she may come to show a “Martha who is not a saint.” During that, as the “Martha who is not a saint”, her words, gaze and facial expressions suddenly turn sharp, the atmosphere around her becomes unyielding, and she becomes dynamic and determined right after. This happens when she is also doing things such as sulking, getting angry, or unconsciously getting quite irritated at those being dangerous. But she will control no more than her bare-knuckle brawling. Given that she received her cross staff from “Him”. This face shown to her close companions, from the figure of herself in those days as “the town girl who lived together with her younger brother and sister before He had passed by” and from before she ended up as a saint, is also a form of Martha that comes from her trust, as one who displays a kind of dependence on others. Although she is a genuine saint, this persona is a little extreme. Still, even while displaying such behaviour, Martha's core remains unchanged as that of a saint. Even though it is a bit distant from the “image of a perfect saint”, her charm that captivates everybody, her indomitable spirit and belief that guides and protects each single person, her love for people, and so on, are all fundamentally constant with her saintly essence. Nevertheless, the point is, the difference is whether her filter is ON or OFF. Martha has nothing to wish for on the Holy Grail that does not belong to the Messiah’s. Similarly, like the times of before, she will live as a saint even after she had materialized as a Servant. Therefore, she will be cooperative with the activities of the Master. So long as the Master continues to walk on the correct path.