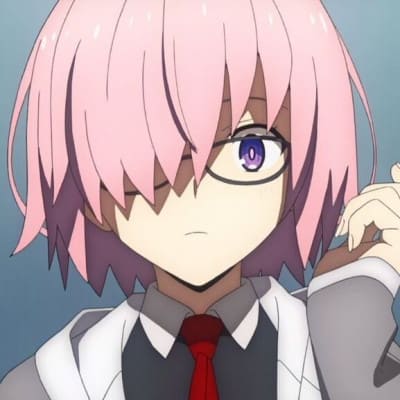 Mash Kyrielight, Class Name Shielder, is a Shielder-class Servant contracted with Ritsuka Fujimaru in the Grand Orders of Fate/Grand Order. Mash is a young woman with short lilac hair, lavender eyes and fair skin. Her figure is fairly athletic, and her breasts have elicited comments (some of which are rather crude) from several other Servants about her physique and have also garnered her the nickname "Mashmallow". As a byproduct of her Demi-Servant augmentation preserving her body at its peak physical condition, she will continue to appear as if she is a young woman regardless of her chronological age. In her casual outfit, Mash wears rectangular frame glasses, a grey hoodie over a black shirt over a white-collar shirt, a red tie bearing the Chaldea insignia, a black skirt and tights, and brown shoes. In her Demi-Servant outfit Mash wears skin-tight black and purple armor that resembles an extremely short mini-dress that exposes her butt, emphasizes her breasts, and reveals her panties. There is a hole that exposes her stomach area. She also wears black gauntlets and boots, a garter on her right thigh, a large cross-shaped shield and she doesn't wear her glasses. With Ortinax equipped, she wears a more technologically advanced suit of armor with thigh-high boots and a visor, which have been designed to enhance her physical capabilities and compensate for Galahad's refusal to cooperate with her. Mash is a mysterious, kind-hearted girl. She refers to Ritsuka Fujimaru as her senior (先輩, senpai?) even before Ritsuka becomes her Master, feeling that something about them is especially easy to relate to.[8] However, that smile belies a deep sorrow and resolve that has accepted her fate as a person with a set life-span since day one. As she has spent nearly all of her life in an isolation chamber within Chaldea, she is somewhat naïve and lacking in worldly experience. Despite this, she knows about a wide variety of subjects due to her education via Sheba, and she is especially knowledgeable about historical figures. Mash was initially designed to have no personality whatsoever in order to facilitate the Demi-Servant creation process, but Roman encouraged her to begin expressing her own opinions, allowing her to begin forming a sense of self. Mash often fears that her Demi-Servant state makes her inferior to true Servants, and until she learned how to use her Noble Phantasm she thought herself to be all but useless to Ritsuka. Even before her Demi-Servant abilities manifested, she was devoted to the cause of Chaldea and sought to assist it however she can; when she is unable to participate in battle, she keeps a close eye on Ritsuka as a navigator. She does her best to hide her fear when in battle, and prioritizes keeping Ritsuka safe above all else. It has been hinted that she possess romantic and sexual feelings for Ritsuka as she is often seen blushing when compared as a couple with them. However, her naivety means that she does not yet realize what those feelings are. Mash is a big fan of detective stories, especially Sherlock Holmes.