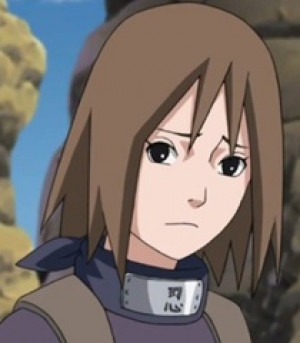 Matsuri (マツリ, Matsuri) is a genin from Sunagakure. In the anime, she is part of a team alongside Yukata and Mikoshi. In the anime, Matsuri witnessed her parents' murder in the past, making her adverse to weapons and violence. In the manga, Matsuri is simply a reverent admirer of Gaara or any other powerful ninja; Sha no Sho states that she has no interest in any other type of man. In the anime, by the Fourth Shinobi World War, her admiration extends to Naruto Uzumaki, whom she swoons over even in the middle of combat. Gaara remains her seeming preference, however, as she is offended whenever he is criticised and will disobey orders for his benefit. When she's first introduced in the anime, Matsuri is a shy and quiet girl who always uses the proper honourifics. Under Gaara's tutelage, she becomes braver and more outspoken, to the point that she ignores even the Third Tsuchikage's instructions. While Matsuri is reluctant to use weapons in Part I, she has fewer inhibitions by the start of Part II; she will use weapons to protect her comrades and Sunagakure's reputation, but will avoid causing harm to others. Although Matsuri is usually nice, she can also be very aggressive, such as when she hit Naruto in manga, struck Ittetsu, and hits Kiba in anime, thereby starting the fight between the participants of Chūnin Exams. Matsuri has straight chin-length brown hair, dark eyes, and fair skin. In Part I in the anime, she wore a blue-green blouse that hung off her left shoulder, a white and pink sleeveless shirt underneath, a short yellow scarf tied around her neck, and a black short skirt. She also wore long, thigh-high stockings, brown sandals, and black gloves with a grey elbow-length arm guard on her right arm. During the Chūnin Exams, she wears two arm guards instead of one, a dark pink shirt with cuts over the shoulders, a white shirt underneath the other, and a black forehead protector instead of her scarf. In Part II, she wears a dark shirt with a skirt of the same colour and a Sunagakure flak jacket.