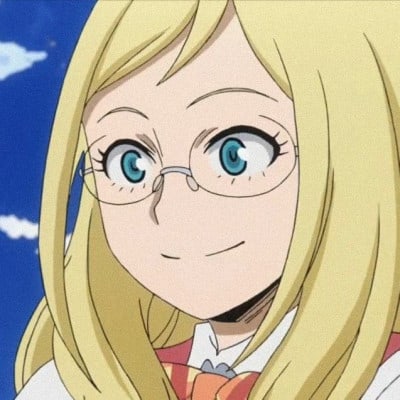 Melissa Shield is one of the main characters in My Hero Academia: Two Heroes. She is a third-year student at I-Island Academy and the daughter of Professor David Shield. Melissa is a shapely and attractive pale-skinned young woman of slightly above average height with quite a round face. She has wavy blonde hair which reaches halfway down her back, two shorter pieces she leaves over her shoulders, side-swept bangs that frames her face, aqua-blue eyes with notable upper eyelashes, some slightly longer ones extending on each side and pronounced lower eyelashes. She normally wears a white short-sleeved dress shirt with plaid cuffs, a large bow of the same design at her neck, and a dark raspberry pink waistcoat. Accompanying these are pale gray Capri pants, under which are a pair of plaid pink socks as well as a pair of heeled brown boots. She also wears a wristwatch and pink, oval-framed glasses. Her formal look is her hair up in a high ponytail that is tied with a large black bow with bangs swept back underneath a red headband, while her face-framing is left loose. She has golden earrings which hang from her earlobes and she doesn’t wear her glasses. She wears a strapless dress with a sweetheart neckline. The upper half of the dress is a deep blue, while the skirt is a pale powder blue. Separating the two segments is a black cloth belt with a large white rose that sits slightly to her left, covering where the material is tied. The belt matches the black ruffles underneath her knee-length skirt. On her feet, she wears white heels with straps and an open toe. Her toenails have painted a shade of coral pink, the same as her fingernails and lips. Melissa is a kindhearted girl with a positive attitude and vast intelligence. Despite being Quirkless, Melissa works hard and desires to become a hero. She looks up to heroes like All Might, but admires her father the most. Melissa wants to help support heroes as her father does. She believes that by studying hard to create new inventions that she and her father can indirectly fight for peace. Melissa is very outgoing and generous. She made quick friends with most of Class 1-A, especially Izuku Midoriya. U.A. students joined her for the I-Expo, where she showed them around its attractions and learned about Izuku's Quirk. Melissa generously gave Full Gauntlet to Izuku to help him reduce the strain on his body because the scars on his hand concerned her. As a scientist, Melissa is naturally curious. She took Izuku out of his comfort zone when she got close to his body to examine his hero costume. She is humble about all of her creations and wants them to go to good use. Melissa embodies the will of a hero in the same way Izuku does. Despite being Quirkless, she remains calm and wants to help save people. During the villain attack on the expo, Melissa was a key player in releasing the island's citizens from Wolfram's grip. To save Izuku, Melissa even risked her life to tackle a dangerous villain.