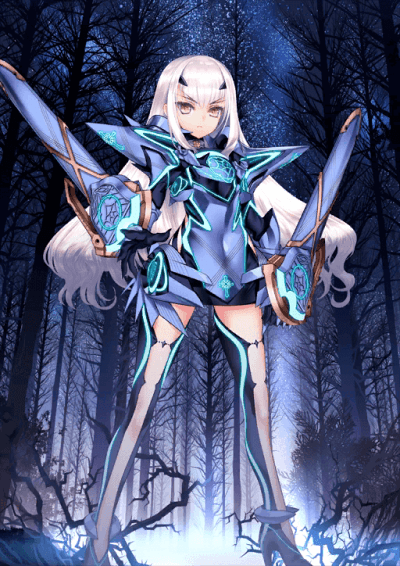 Melusine, Class Name Lancer, is a Lancer-class Masterless Stray Servant summoned in the Grand Orders of Fate/Grand Order. She is later summoned by Ritsuka Fujimaru in the Grand Orders of Fate/Grand Order. Withdrawn, but active. The type who gets things done, swiftly carrying out her duty while keeping her feelings concealed within. This maiden of a knight is a clean freak who does not play around, and is always cloaked in a tense atmosphere. Since she classifies humans as something bad and mercilessly rejects them, she is thought of as a "cruel fairy", however, while she might shun humans, she does not detest them or consider them below herself. She simply perceives them as "life forms with individually low ability for survival". Due in part to how she came into existence as a piece of rotten flesh, Melusine does not discriminate against others using "the mode of life one was born with" as a pretext. When she is conducting herself as a Fairy Knight, her first person pronoun is "boku" and she has a prince-like demeanor; but when she returns to being Melusine, her first person pronoun becomes "watashi" and her natural personality comes out. Since she is originally someone who was "thrown away and left all by herself", she is prone to self-deprecating and easily succumbs to loneliness. Even after discovering the extent of Aurora's crimes and realizing she was nothing more than a tool for Aurora, she cannot help but continue to love her "mother". Furthermore, if Aurora dies for any reason her name will lose its power and she will turn into Albion as a Calamity. Since she recognizes herself as the strongest creature, her preferences aren't based on whether one is strong or weak. Compared to her, everyone is a "weakling", after all. People possessing "courage to oppose those stronger than them" are not the type Melusine will grow to like, but ones with "kindness to care for those weaker than them". Or rather, she'll fawn on them going "The strong are to be obeyed and followed. That is absolute. In other words, obey and follow me."