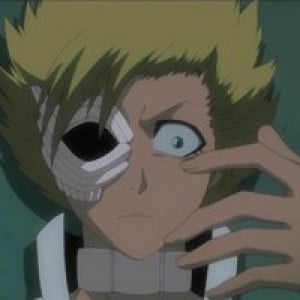 Menoly Mallia (メノリ•マリア, Menori Maria) is the 34th Arrancar in Sōsuke Aizen's army. She and Loly Aivirrne served as Aizen's aides. Menoly is a teenage-looking female Arrancar with tomboyish features. She has short, slicked blonde hair with a slight fringe over her right eye. In addition, Menoly has green eyes. Her Hollow mask is positioned around her right eye, completely obscuring it from view, with teeth dotted around the bottom. The location of her Hollow hole is unknown. Her attire consists of a white dress with short sleeves, which are slit and run slightly past her elbows, and an upturned collar. Menoly’s dress is also unzipped at the front revealing her cleavage. Her dress also exposes her waist and part of her thighs on both sides of her body. A black sash is worn loosely around her hips. As with most Arrancar, she wears black tabi socks and low-heel sandals. Menoly completes her outfit with a white, segmented choker and a series of white bracelets on her arms. Menoly is always with Loly Aivirrne and out of the two, she is much more passive and rational. She will often be the target of Loly's peer pressure when she doesn't want to follow one of Loly's plans. In these instances, Loly will berate her verbally or go so far as to physically hit Menoly when she objects. While still helping Loly torment others, she is still bothered by her conscience, especially when she feels Loly takes it too far. Like Loly Aivirrne, Menoly is very loyal to Sōsuke Aizen but will also speak out against an order if she feels that it jeopardizes his safety as she is reluctant to leave him alone with Orihime Inoue as she considers her powers to be a mystery and, thus, dangerous. However, she is swift to back off from argument if Aizen shows even the slightest bit of annoyance. Menoly greatly fears those who are much more powerful than she is, especially those who are Espada in rank including Grimmjow Jaegerjaquez, Ulquiorra Cifer and Yammy Llargo. While much more passive than Loly, she can till lose her temper when the situation calls for it. When Grimmjow hurts Loly, Menoly flies into a rage and moves to attack him with a Cero despite fearing his power and knowing that she cannot defeat him. Menoly also fears Orihime's powers greatly, wanting to stay away from her after the Human girl revived her when she was killed by Grimmjow.