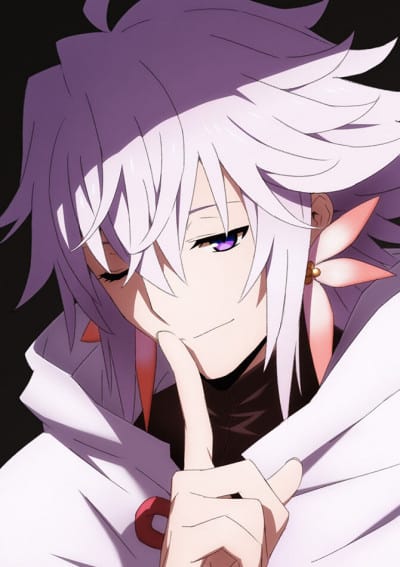 Merlin, Class Name Caster, is a Caster-class Servant summoned by Ritsuka Fujimaru in the Grand Orders of Fate/Grand Order. He holds the position of Grand Caster. Merlin wears a robe woven with the finest fabrics, though he still looks modest, his long hair appearing with the colours of the rainbow under sunlight. Just like this, it is not like he is an ally of humans. A young man who is like a wind blowing on the grasslands. Before him, anyone would end up letting the tension out of their shoulders - a refreshingly righteous person. Still, due to seemingly being quite lacking in terms of seriousness and such together with a lack of the sense of responsibility, one can see that Merlin may also appear as a shady con man. A rhetorician who, even while perceiving things in an objective manner and accepting the cruelty of the world of humans, turns it into something bright by saying things like: “But, it wouldn’t be fun otherwise, right?” Despite being a hybrid being, Merlin has never hated humans. Rather, he is fond of them to such a degree that it is beyond natural. He loves the world of humans, loves mischief, and loves girls. Generally, he is the Magus of Flowers who retorts at most things with a refreshing smile and a calm expression such as “now, now.” Openly like this, he tends to appear as having a perfectly happy personality, a perfectly happy guy, without a single worry, but since Merlin himself is self-aware about the fact that he is a foreign body in regards to human society, he never crosses that last step... the wall called friendship. Ultimately, (just like a child who enjoys tasty food,) he is always watching over and protecting the world so that mankind can reach a happy outcome. ... So, if one is looking only at the end result, Merlin is a good man, and a wise one. But inside, he is an incubus, a being very far apart from humans. He, a being that consume dreams, can essentially understand human emotions, but cannot truly sympathize with it. He is an alien-like, inhuman being, who only rationally excuses himself inside a dream (dream = a human mind activity) and consumes it, and then leaves just like an insect. Due to this macroscopic evaluation criteria, perhaps he just cannot understand the human heart, unable to even know the actions of a person or to sympathize with it. Normally, he would be an identical being with the Beasts, an adolescent life form of a higher order that is certified as an enemy of humanity. Merlin is very boastful about his abilities as a mage, claiming that he inflicts jealousy and envy on all other Servants, especially Casters, since they are second-rate to him. It's a given that Merlin could see through the identity of the ringleader behind the Grand Orders incident. It's also a given that he stays silent about it. The human protagonist must struggle with his own power; it is only fate, for otherwise, they would only perceive their enemy as one they cannot defeat. Not even Merlin can surpass the last boss (the King of Magecraft) this time. Actually, on this basis, no Heroic Spirit can surpass him. The one who is destined to be able to surpass him is not a Heroic Spirit, but only a human who lives (now) in the present. Therefore, he shall watch over the Master, just as he had once watched over many kings in the past. Merlin shall believe in the Master, the hope of human history; he shall lend his power to the utmost; and then he shall entertain himself relaxingly. Merlin's desire is to carve open a path for the protagonist's own destiny, to watch him off as he walks towards the future, to gaze at that kind of "beautiful view". "After that, I'll just do as I always do; disappearing completely from everybody's memory. Most other things, I can do without much of a fuss. But this alone, I can never get used to."