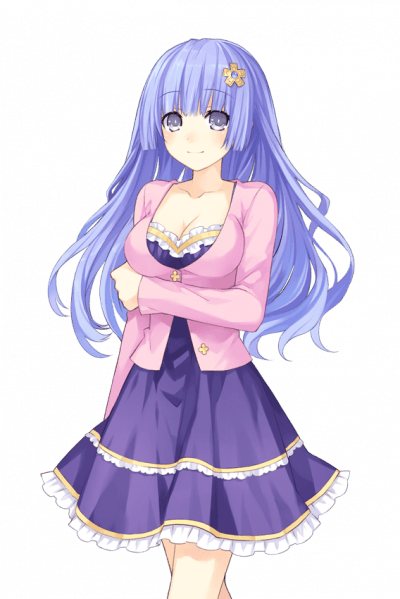 Miku Izayoi is the sixth Spirit to appear who was, like Kotori, originally a human that gained the power of a Spirit around the same time Shido first met Tohka. Miku, as an idol, is without a doubt a beautiful girl. She has a voluptuous figure and smooth skin that has never missed maintenance. She has long bluish purple hair in a hime cut, while the color of her eyes is light indigo. Miku's height is stated to be 165 cm, and her three sizes are B94/W63/H88. Her Astral Dress is mainly yellow with blue and white ruffles covering some parts of her dress. She wears a yellow moon hair clip with a lily connected to the curve ends of the moon. White lilies and petals can be seen next to the moon hair clip. She also wears crescent moon earrings and a choker on her neck with a white lily attached to it. While at school, she wears a deep blue sailor outfit as well as a yellow flower petal hair clip that resembles the one she uses when wearing her Astral Dress. Miku harbors a strong hatred towards men and treats girls as servants fit to serve her, which is why she transferred to an all-girls school, Rindouji all-girls private academy. Due to her past, in which people that were once her fans (mostly male) accused her of scandals in the past that were not true, leading to her losing her voice from the pressure and caused her to almost commit suicide. Even her opinion of women was initially poor, seeing them as replaceable servants at best and not caring if they died, even believing they should be happy to die for her. Her coldness was to the extent that even Shido openly admitted he hated her. She is very flirtatious, both before and after warming up to Shido, she expresses this towards most women who fit her type (and Shido) and is very blunt about it. After warming up to Shido, she doesn't hesitate to flirt with both him and the other Spirits and does not even mind Shido having a harem, in fact, she pretty much encourages it. Miku also does not show any more of her previous arrogance, while no longer hating men, she still prefers to be by her female fans more, and she no longer treats women as servants and effectively gave up her power to control people when she was sealed. Shido describes her current personality as being "very childish."

No images found
Want to see more from the gallery? Register or Login
bisexual