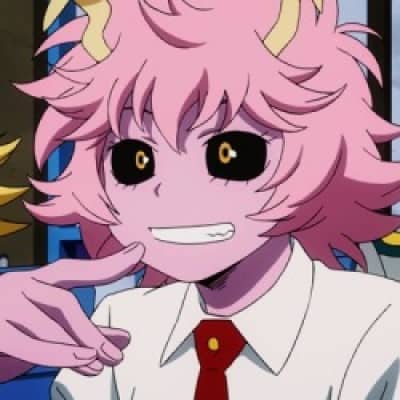 Mina Ashido, also known as Pinky, is a student in Class 1-A at U.A. High School, training to become a Pro Hero. Mina is a girl of medium height, possibly set a little more broadly than some of her other female classmates, with healthy thighs. Due to her Quirk, her skin is a light shade of pink, and she has somewhat square shaped eyes, with a black sclera and light yellow irises, and notably long eyelashes below and around the sides of her eyes. Minoru Mineta comments that "she's got a super athletic body." Her face is framed by short hair, fluffy and unruly, which is a pink color, slightly darker than her skin's. She has two thin, pale yellow horns protruding from her head, hooked squarely and leaning diagonally to opposite sides, which seem to be slightly flexible, able to bend a bit to each side. During school hours, she wears the normal female U.A. uniform. Her hero costume consists of a plain white mask over her eyes, with a purple and turquoise skintight bodysuit with a camouflage pattern, ending just above her breasts. Over this, she wears a cropped, sleeveless, tan-colored waistcoat with white fur along its collar, which she leaves unbuttoned. She wears custom made plum violet and beige acid-proof boots with holes in the soles, allowing her to secrete acid from her feet to slide around. The winter version of her costume is very similar, the only difference being that she replaces her usual waistcoat with another, which is slightly longer and has sleeves down to her elbows. A large hexagonal patch with a purple letter 'P' (standing for "Pinky", Mina's hero name) stitched onto the shoulder of each sleeve. The fur lining her collar is also thicker and wider, reaching her chin, and is joined in the center by two clasps instead of being undone like the rest of her jacket. Mina is a cheerful and easygoing girl who displays a smile on her face most of the time. Highly social and excitable, she loves to hang out with her friends and is shown to become very upset when denied an opportunity to be at a gathering. She possesses a strong fashion sense and likes to go shopping. Due to her athleticism and energy, Mina enjoys and is very skilled at dancing. Her demeanor becomes more strict and perfectionistic when teaching others how to dance, in direct contrast to her usual happy-go-lucky nature. She is known to use her dancing to somehow pacify even those who have bad relationships with others. Mina's academic performance is quite poor, with Mina goofily laughing about it despite showing clear anxiety and frustration on the inside. Because of that, she is often viewed as an airhead by her classmates (second only to Denki Kaminari). However, Mina is capable of showing dedication to her studies as long as she gets proper tutoring. Mina is extremely courageous and is viewed as an ideal personality for hero work. Before entering U.A. High School, Mina would condemn bullying in middle school. She is capable of putting her life on the line to save others, even if she can't deal with the fear afterward. This was seen when she lied to Gigantomachia to protect her friends. Mina is somewhat of a romantic and holds a lot of interest over the love lives of other people, to the point of being obnoxiously curious and intrusive about them. Her suspicions, however, tend to be rather baseless most of the time, as she seems to view any instance of a pairing as possible proof of a relationship regardless of compatibility.