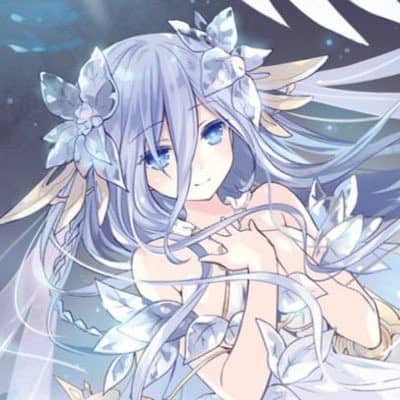 Mio Takamiya is a mysterious woman connected to both Shido and Mana's past. She is also known as the Spirit of Origin, due to her existence being the source for the appearance of other Spirits. As Mana's memories were starting to flash to her like a camera shutter, she briefly managed to catch a glimpse of Mio's appearance, describing her as a girl with long hair. However, due to Mio's ability to transform, her appearance is never set in stone. When <Phantom>'s mosaic is exposed by Kurumi, she appears identical to her clone Reine Murasame. But, upon emerging out from Kurumi's shadow, she reverts to same appearance she had 30 years ago when she first meet Shinji, which looks like a slightly younger version of Reine. In the present day, Mio often disguised herself in an elaborate mosaic in order to distribute the Sephira more efficiently. In her Astral Dress, she wears a beautifully elaborate dress with the same transparent color as water droplets. There are flower ornaments, designed like cherry blossoms, around her bosom and in her hair, which are made out of a mysterious material of light. Gold jewelry adorns her neck, shoulders, and torso, the last of which holds her teddy bear in place. In this state, Mio is also barefoot. Her Astral Dress is described to exude a radiance similar to the Northern Lights. Behind her, there is a distorted halo embedded with ten stars. Each time Mio reclaims one of the Sephira Crystals, a corresponding star would glow in the same color as the recaptured crystal. Her three sizes are B89/W60/H87. When she first appeared in this world, Mio had the mentality of an infant. However, through various exposure to different forms of media, she quickly gains self-awareness and intellect at an astonishing rate. Her relationship with Shinji also gave her key insight into the concept of love. However, after Shinji was shot by Westcott, Mio's personality changes into becoming extremely goal driven and to some extent ruthless, being willing to sacrifice countless humans to purify the Sephira Crystals if it meant achieving her wish to impart her powers onto Shinji. However, her morality hasn't completely faded away. She willingly saved Kurumi despite being a complete stranger at the time and offered a sincere apology to Kurumi after revealing the truth about Spirits to her. Additionally, by the time she partnered up with Kurumi to hunt Spirits, Mio's demeanor was described as very melancholic, always having a wistful expression on her face. In her attempt to bring back Shinji, Mio is even willing to sacrifice the Spirits despite viewing them as her daughters, and even erase Shido's identity. However, she openly acknowledges the selfishness of her actions. In her own words, she is too physically strong to commit suicide, but too emotionally weak to move on from Shinji's death. Deep down, she understands that Shido cannot truly replace Shinji, and hoped to create someone powerful enough to put her out of her misery. After coming to terms with this, Mio becomes determined to protect her remaining loved ones, even at the cost of her own life.