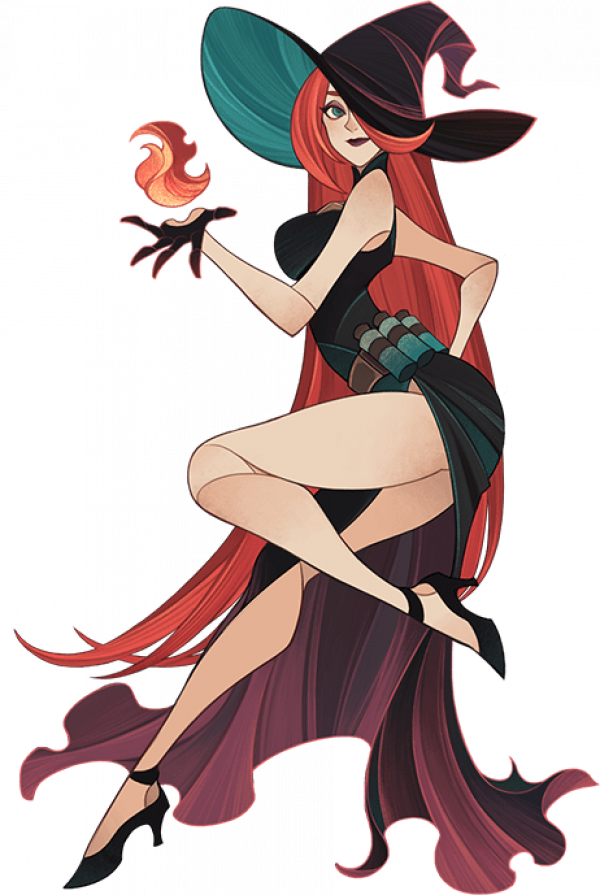 As a young girl, Mirael loved sitting alone outside the village with the little castles and forts she'd carefully construct from twigs. Sometimes, she'd spend a whole day putting together a miniature village with its own manors, guildhalls, and inns. There was nothing more fun, after all, than watching it all burn down. The leaping tongues of orange and yellow called to her, and from the first time she saw a pyromancer, juggling smoking embers for an appreciative crowd, she knew what she wanted to be when she grew up. Fire is an aggressive and fickle medium, and pyromancy is accordingly a craft that cares not for the user, regarding the caller and the target the same. Those drawn to it are often temperamental and impulsive, and Mirael is no exception. It burns through the large and the small alike, and as such Mirael's petite frame has always seemed oddly at ease when hurling flaming globules of elemental fury at any obstacles in front of her. She was nicknamed “Volcano” as an adolescent due to her quick temper and explosive outbursts. Her classmates would largely avoid her, and those with whom she chose to interact would always take on a soothing, deferential tone, lest they find their hair singed and robes smoldering. Though it is well documented that those with a proclivity for fire magic tend toward the mischievous, Mirael was in a league of her own. She delighted in causing trouble and relished the ensuing chaos her pranks always promised to deliver. There was nothing that gave her more joy as a teen than watching the distinguished faculty of the magic academy rushing from one corner of the great hall to another, attempting to extinguish the fist-sized Emberlings she'd summoned. She like the cackling, bouncy little things, but she liked the trouble they made even more. Mirael's abilities were outstanding and her affinity unquestionable, but as with many a pyromancer before her, she had trouble keeping them and her temper in check, and the academy could only accept so much burned furniture and the following complaints. After heated deliberation, Mirael was expelled indefinitely. She was overjoyed at the news, and knew immediately that the first thing she'd do was build that big, imposing academy in twigs, and watch it turn to ash. When she heard of the reward being offered from the king to man the far-flung outposts of Esperia, she jumped at the opportunity. Finally, a way to utilize her talents in a way both fun and productive! She learned on these lonely watchtowers that she still had a ways to go in getting control over her power. Oftentimes, when reducing an unfortunate Hypogean scout to a pile of cinders, she would set the nearby trees alight as well. This would often burn through a patch of wood for days, but Mirael would always use her bounty rewards to pay back those whose lumber she'd burned. A fiery heart, a violent heart even, isn't always a bad heart. Mirael cares about those around her like anyone else, and she'll never forego the chance to stand up for her friends.That being said, she still isn't the easiest person to be around. “You look cold. Let me warm you up.”