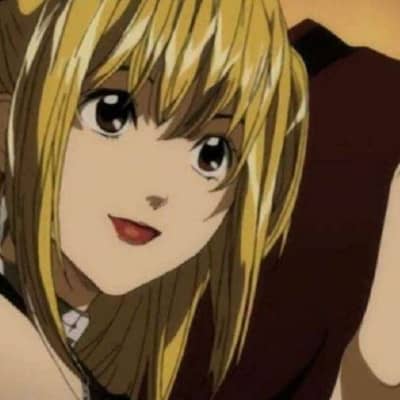 Misa Amane is an up-and-coming model, actress, and supporter of Kira who eventually becomes the Second Kira. After gaining a Death Note, she seeks out Kira in order to thank him for killing the man who murdered her family and to offer him her help. Having made the trade for the Shinigami Eyes, Misa learns that the identity of Kira is Light Yagami. After a meeting with Light, she decides to dedicate her life to helping Light however she can, and becomes determined to use her eyes to uncover L's real name. Misa is a short, slender, attractive young woman with long, straight, golden-blonde hair, most commonly styled with a portion of her hair in pigtails tied with red bands, but occasionally worn loose as well. In the anime, it seems that she was a brunette at one point.[4] In the manga, her eyes are predominantly light brown; however, they have also been shown as green. In the anime, they alternate between light brown and blue. Her eyes turn bright red while using the power of the Shinigami Eyes, which allow her to see a person's name and lifespan above their head. In the games, her eyes are usually light brown but have also been seen as pink. Misa also appears to have black hair in the movie, which she was wearing in pigtails throughout the film. Misa often dresses in a Gothic and Punk fashion, though noticeably less after the time skip. She also typically paints her nails bright red or dark purple and wears bright red lipstick. Misa tends to wear cross jewelry, though the crosses were changed to "fleurs-de-lis" in the anime adaptations (most notably on the Misa finger puppet). Despite this, Misa is depicted with a cross in the first anime opening and in her model sheet image in the liner notes of the third anime soundtrack. She also has a cross on the collector's figure included with volume 5 of the DVD sets.