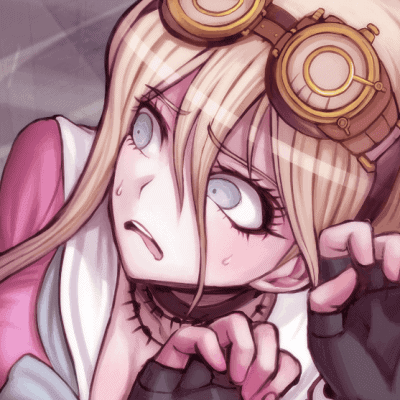 TALENT: SHSL Inventor APPEREANCE: Miu is a tall young woman with long blonde hair and a pair of ahoges. She has bluish-grey eyes. Her irises, as well as the rings around her pupils, have an unusual, ragged pattern, making them appear slightly mechanical-looking and thus possibly referencing her talent. Miu wears brown colored goggles on her head. She wears a pink sailor school uniform and matching skirt. She wears black fingerless gloves, and black boots with gold buttons on them. The buckles on the boots are also gold. She wears black straps connected by gold rings on her legs, and over her clothes. The straps for her legs have gold clips that are attached to her white socks. She wears a black choker collar, and two smaller black collars, around her neck. On her collar, she wears a blue bear pin with a red ribbon wrapped around it's neck. PERSONALITY: Miu is described as an oddball, having overly confident, loud personality and a frighteningly sharp tongue. She considers herself a genius, and every time she opens her mouth she spews a parade of reckless remarks and insults, strongly putting pressure on others. She uses the Japanese word "ore-sama" to refer herself, which is considered very arrogant and more traditionally masculine. However, Miu's arrogant personality seems to be only a mask which can drop fairly easily. This often happens when her festival of coarse language and dirty jokes actually get replied or ignored. Then, her personality quickly changes into a timid weakling, who is terrified of other people being angry with her. Because of this, she has the charm similar to an innocent child. As an inventor, she is skilled but also an eccentric who treats her failed projects with the idea that "I transferred the rights to the company, so it's got nothing to do with me". She has made all kinds amazing conviniences both inside and outside of the game, but only deems her inventions as a success when they help the user to perform a task while sleeping. Miu has a very cowardly and self-centered personality, immediately looking for excuses to be absent from the Class Trial after being reminded that she would be executed with everyone reaches the wrong conclusion. Also, despite her amazing inventive genius, she is rather dumb when it comes to other matters, being usually ignored by the other characters during trials.