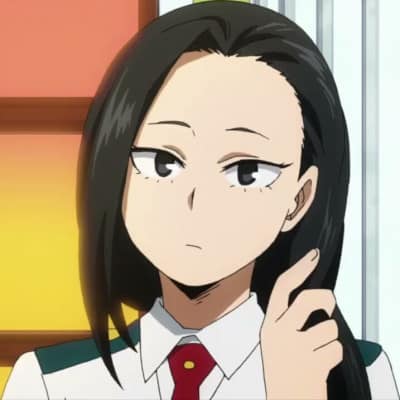 Momo Yaoyorozu, also known as the Everything Hero: Creati, is the Vice President of Class 1-A at U.A. High School, where she got in through official recommendations and is training there to become a Pro Hero. Momo is a fairly tall teenage girl with a rather mature physique, considering her age. She has long black hair that is normally tied into a spiky ponytail with a large strand hanging on the right side of her face and onyx eyes that point slightly inwards, which seems to resemble a cat. During school hours, she wears the standard female uniform which consists of a gray blazer with blue-green stripes, a formal white shirt, red tie, blue-green pleated skirt, black knee socks, and brown shoes. Her hero costume consists of a high-collared, sleeveless crimson leotard with silver lines at her waist and around her arms, which is open to expose her skin from her neck to just below her navel. She sports calf-length crimson boots with heels, which dip sharply down in the center, and two gold utility belts around her waist, another, thinner one around the top portion of her chest, below her shoulders. The design choice allows her to create items from as many points in her body as possible, as her Quirk can only be used if her skin is exposed. During the winter months, she wears a long, high-collared red cape, and a ring going around her neck with a large gemstone at her throat. Momo is a very prudent, dedicated person who acts as a natural leader. She is generally level-headed and calm in dangerous situations, but she isn't above falling into a panic. Momo can be blunt with her comments about people's mistakes and miscalculations, tending to be very direct and wishing to help her peers improve enough to become great heroes, such as when she tutored her classmates at her home. Momo shows further development as a selfless hero who gets inspiration from others. Momo typically takes adverse situations in stride, expressing little concern for losing most of her clothing in battle; as she knows how to construct another set, and would have made her costume even more revealing were it not for restrictions on exposed skin in a costume. However, this often makes others think of her as an exhibitionist. Ironically, she is rather innocent and sensitive to vulgarity and rude mannerisms, constantly frustrated by sexual advancements from Minoru Mineta and Katsuki Bakugo's crude attitude. This innocence shows that she has a somewhat casual, natural, and non-lewd view toward nudity, which explains her lack of modesty in her costume. While originally confident in herself, Momo's pride was crushed after her rapid loss to Fumikage Tokoyami in the U.A. Sports Festival and the comparisons she made between Shoto Todoroki and herself, starting to lose confidence in her own ability to make quick choices on practical situations. It was further damaged during Uwabami's shallow internship, believing the heroine chose her despite being "an unworthy student" and tried to find deeper lessons to reassure herself. Thanks to Shoto's encouragement on their final exams, Momo regained confidence in her quick-thinking, learning people have different skills and sometimes can complement each other. Even when she is weakened and trapped by her opponents, she doesn't give up and shows the increase of her Quirk output, ultimately defeating her enemies. When she displays excitement towards pass time with her friends or help them, Momo becomes upbeat and eager. She also tends to accidentally reveal how rich she is, yet most people understand she doesn't do it out of malice. Despite her mature mannerisms, she occasionally finds herself roped into silly situations such as cheerleading, although she rarely expresses much enthusiasm in doing so.