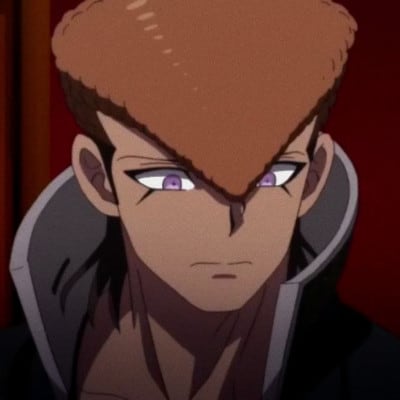 Mondo Owada, is a student in Hope's Peak Academy's Class 78th, and a participant of the Killing School Life featured in Danganronpa: Trigger Happy Havoc. His title is the Ultimate Biker Gang Leader. At the beginning of the Killing School Life in Danganronpa: Trigger Happy Havoc, Mondo appears to be a young high school-aged teenager, but due to the memory loss, he is two years older than he believed. He has slightly tanned skin and a tall, muscular build which gives him a bulky figure. He wears his hair as a dark-brown punch perm with a styled-1960s pompadour. His pompadour is approximately fourteen inches when compared with his shoulder width which can be estimated to be around fourteen inches. He has a deep-ridged black eye-line circling his purple eyes, which gives him an intimidating appearance. Mondo's outfit reflects that of a typical Japanese biker gang member, comprising of a high-collared black long overcoat known in Japan as "tokkō-fuku", adorned with the symbol of The Crazy Diamonds along with kanji and dragon symbol motifs colored orange on the back and side, worn open over a white A-shirt. He wears baggy black pants held up by a belt and his shoes are white loafers. The buckle of Mondo's belt is shaped like the face of a Komainu. During his school years, he wore boxer briefs. The underwear has a snug fit which is ideally suited to motorbike riding. His boxer shorts have a tiger stripe pattern with a white rim and line patterning, which appears to be a reference to the tiger theme of his execution. Behaving like a stereotypical delinquent, Mondo is foul-mouthed and can come off as a rude and intimidating individual. When Makoto first met Mondo he did his best to keep the conversation short, as he realized Mondo could become easily aggravated depending on what was said. He is very easy to provoke, and will not hesitate to resort to violence if he starts to lose his patience. This is shown during his interactions with Byakuya who acts condescendingly towards him, prompting Mondo to fight back without considering the consequences. Just like Chihiro, Mondo has a severe complex about being seen as weak, which he represses by constantly repeating in his mind that he is strong. This complex stems from the fact that his gang members tended to look down on him due to his status as the little brother of Daiya, the first leader of The Crazy Diamonds. Mondo ultimately caused his brother's death in a street race by acting rash in oncoming traffic, prompting Daiya to save Mondo in exchange for his own life. It was Mondo's own weakness who caused Daiya's death and this constant burden was placed on him, as he had to live with and share the lie with the rest of his members that it was Daiya who had acted rashly. Mondo states that he tends to be very nervous around girls that he likes, causing him to raise his voice and ultimately scare them away, something that has happened at least 10 times already. This potentially shows that Mondo is shy around new people and is unaware of how to relinquish his ruffian type personality while in calmer situations. Mondo has a soft spot for dogs and had one named Chuck during his childhood however he died at 9 years of age. When speaking with Makoto about his dog, Mondo becomes very emotional and has no choice but to leave the conversation as he was beginning to tear up. Makoto stated never seeing him in such a way before, showing a softer and emotional side to Mondo's personality that he tries to avoid presenting to others. He states in a Free Time Event that he likes both cats and dogs but prefers dogs. His final Free Time Event reveals his insecurities over his future. He believes that the only choice for him once high school is over is to get a job and decides that he would choose to become a carpenter since he wants to start making things instead of breaking them, showing that in a sense Mondo wishes to reform his personality and help make a difference without aggression or violence.