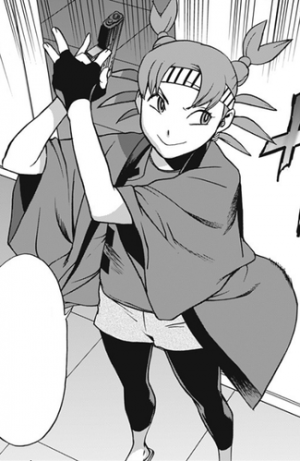 Monika Kaniyashiki also known as Kaniko, is a member of the Police Force. Monika is a short, petite girl with quite a round face and semicircular eyes, their irises white. Her hair is short, and worn styled like a crab’s body in two high bunches with claw-shaped ends, six short tufts protruding out to the sides, and split bangs hanging over each eye. While working for the Kanidoge chain as a undercover cop, she wears what looks like a knee-length kimono, left open to reveal a combat vest and pale shorts, a pair of black 3/4 leggings underneath. She also sports fingerless gloves and geta on her feet, as well as a striped headband. When working as a police officer, she wears the standard female uniform of the Japanese police. Monika has an cheerful and outgoing personality, tending to be laid back, calm, and openly friendly in personality. This makes Monika easily able to socialize with other people, including those she has just met, and her friendly personality makes her prefer to be called Kaniko than by her real name. She is also a jokester, having a goofy sense of humor, and enjoying making jokes to make others laugh, although this doesn't impress anyone, which she attributes to a lack of humor of others. When she feels upset, her face adopts an appearance that resembles the shell of a Heikegani. Due her behavior, many people do not take her seriously, which is good for her because she is a police officer who usually works undercover. Though she may appear unprofessional, Monika takes her real job very seriously, proving to have great deductive and investigative abilities. She does not hesitate to risk her life to protect others, even if she has to use her Quirk for it, even though this could cause her problems given her cop status. All in all, even when she works as a police officer, her outgoing personality and joking behavior is still present, which makes her teammates sometimes have trouble knowing when she serious or when she is joking.