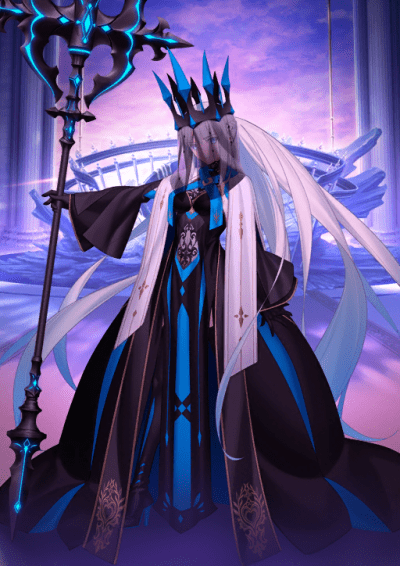 Morgan, Class Name Berserker, is a Berserker-class Servant be summoned by Ritsuka Fujimaru in the Grand Orders of Fate/Grand Order. When she was young and went by the alias Tonelico, she looked exactly like Artoria Caster but with a black bow. This is because fairies who have the same purpose are born with the same appearance. A ruthless queen who relies only on her own power. It isn't that she doesn't trust others, but rather she finds them unreliable. She sets first and foremost the "orderly rule of Britain". She hates people, fairies, the weak, the ugly, equality, peace, and is the "embodiment of evil" as perceived by the masses. However, "hate" does not mean "unwanted", rather it only means "incompatible with each other." For Morgan, justice is “the state of ruling” and evil is “the state of someone interfering with her rule.” Thus, Morgan's own "likes and dislikes" are irrelevant to "good and evil" as a ruler. If something is necessary to rule, she will accept and tolerate it even if she dislikes it. The extremity and authority of her standards are like those of a heartless machine. That being said, Morgan, too, has a heart. Joy, sadness, hate, anger, love, and infatuation, she just doesn't feel them as strongly as she used to anymore. After years of devoting herself to defending Britain, Morgan's heart has grown cold. The only passion that lit within her ― a wish that her past-self continued to crave. "Ruling Britain" is the only goal that continues to drive her. ...Throughout her long journey, she was reminded that this was not a human-like dream from her childhood, but that this is just how she was born. The Morgan of Greater Human History was lecherous, cruel and selfish, a true model of vice, but this Morgan has eliminated those traits and has become a talented woman who has lost her way. A frustrated beauty who is contemplative of her country. The pleasures of sex, the excitement of inflicting pain onto others, and self-absorbed joy are all "boring. I've already grown weary of those matters" so says Morgan. However, since she is only keeping low, it is possible that her former brutality and bad taste will return if she finds herself in a situation or predicament where she is pushed to the brink. Morgan has adopted Baobhan Sith as her daughter, but she only ever praises her when Baobhan Sith torments the weak. However, she genuinely cares for Baobhan. She secretly inherited all the memories of the Proper Human History Morgan through the machinations of the latter, and with them the knowledge that within the Lostbelt she could rewrite Britain's history so she could succeed in ruling Britain where her Proper Human History self failed. Being the ruler of Britain is her whole existence, and without it she believes that she would be worthless. Though once she used to be a kind queen ruling alongside Uther, repeated betrayals and rebellions have long since left her bitter and disillusioned. As such, she is convinced that only by ruling the Lostbelt as a tyrant can she keep Britain from being destroyed, unaware of the fact that Britain's savior was never meant to rule Britain at all and that her kingdom could only be saved through its unmaking. When summoned she regards her master as her husband/wife, a position she defines as being that of total dedication and servitude towards her. She agrees to aid Chaldea when summoned, but adds that she will always hate Proper Human History.