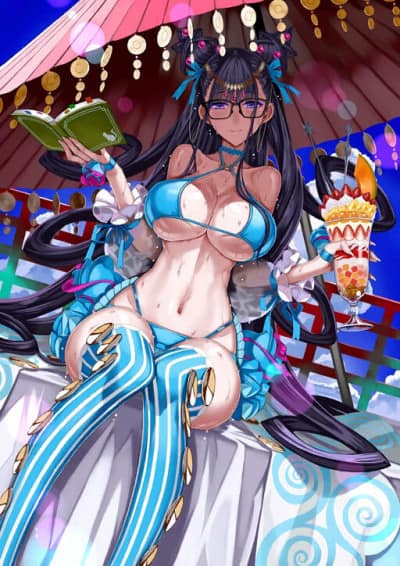 Murasaki Shikibu, Class Name Caster, is a Caster-class Servant summoned by Ritsuka Fujimaru in the Grand Orders of Fate/Grand Order. Murasaki is gracious and eloquent woman in appearance, curvaceous with her large chest as the most prominent feature. From the little exposed skin, she appears to be rather pale. Matching her name, her eyes are deep purple. Her incredibly long hair is brown, and splits into multiple long strands that curl rather unnaturally. She has bangs over her forehead, and hairbands decorated with large blue orbs with a purple spiral, tie her hair into cute, ear-like buns. Her outfit is a beautiful gothic-style dress, the colors consisting mainly of black with blue and purple as complementary ones. The dress's skirt has a spiraled frill all around it. The torso is similar to a corset. The shoulder cloths are large and baggy, and the sleeves are large and open. The under-chest area is clad in the same material as that of the torso, while the over-chest is composed of a brown material. The dress goes up to her neck, and it possesses an ornamental amethyst over her sternum. On her hips are a blue ornament with a purple spiral, attaching long black and blue strips of cloth to her body. She wears a blue purse with a white diamond pattern tied around her waist by a string of beads. Murasaki holds a black umbrella with a blue underside with her right hand. In her second Ascension, the umbrella is discarded. Murasaki now wears a pair of black rimmed glasses over her eyes and a chessboard-patterned cloak with wide sleeves over her body. Around her upper body is now a purple rope tied around her. In her third Ascension, Murasaki changes radically. Her hair goes from brown to black and the curls disappear, growing incredibly long and bending upwards like a wave. Her dress is replaced by a multi-layered, multi-colored kimono, consisting of the colors: pink, red, orange, green, and many shades similar to those. Her glasses disappear, and now a glowing purple insignia floats above her head. One of the long skirts of the layers of the kimono resembles a paper fan. She now holds a fan in her right hand, depicting a bonsai tree. Murasaki attempts to portray an air of elegance, though she is quite clumsy. She deeply enjoys reading, especially books that were written outside of her native country and time. She resents the existence of digital books and prefers paper books. She also holds a fair amount of respect for fellow authors. The well-mannered “studious” type of woman. Well raised and of good judgement. Discreet. Loves reading. Also loves writing stories sparklingly with the elegance of love and poetry. Is methodical and keeps a diary (a quite realistic diary). Normally acts as a “librarian with a composed demeanor” but merrily bursts into poem when the subject becomes certain particular stories, particular books, particular feelings. Her favorite stories are The Tale of the Bamboo Cutter and The Tales of Ise. It is believed that Murasaki Shikibu’s character description was inspired by The Tale of the Bamboo Cutter and her presentation, plotting and characterization all heavily inspired by The Tales of Ise. Those aside, it’s believed that she also took inspirations from multiple other sources, like Bai Letian’s Bai Shi Wenji and Records of the Grand Historian, and that the conversations where Hikaru Genji seduces women are inspired by the T’ang romance tale Youxianku. As for poetry, her three favorite compilations are Kokinshuu, Gosenshuu and Shuuishuu. She was a loving fan of many poem anthologies since when she was alive. Since she’s been summoned to Chaldea, she has been enjoying acting as a librarian. And in the meanwhile, she grew to love stories and poems from eras and regions other than her own, spending all of her free time absorbed in their reading.