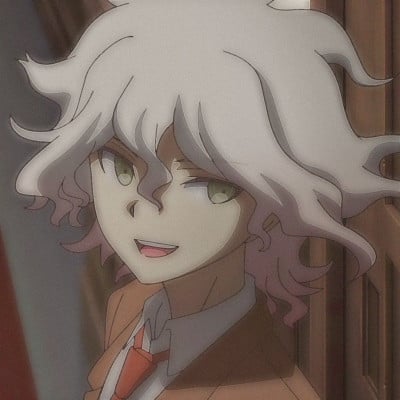 Nagito Komaeda, is a student of Hope's Peak Academy's Class 77-B, and a participant of the Killing School Trip featured in Danganronpa 2: Goodbye Despair. His title is the Ultimate Lucky Student. He, along with Class 77-B, return in Danganronpa 3: The End of Hope's Peak High School to explore their school life leading up to The Tragedy. He also makes an appearance in Danganronpa Another Episode: Ultra Despair Girls as "Servant". He returns once again as the protagonist of the OVA Danganronpa 2.5: Nagito Komaeda and the World Vanquisher, exploring his ideal world. Nagito is a tall, skinny young man with notably wide shoulders, sickly pale skin and light gray-green eyes with thick eyelashes. His hair is shoulder-length and naturally wavy, of an unnaturally pale pinkish off-white color that fades to white the closer to his scalp, and is described as looking like it "doesn't belong to a living person". In Danganronpa 2, his hair has a slightly warmer, cream tone to it, but in Danganronpa 3 his hair appears silvery-white with grey tones. By the events of Danganronpa Another Episode, which is several years later, his hair is longer, messier, and darker (presumably with dirt). Nagito wears a thin, knee-length dark green zipper coat with a jagged-cut tail, which he leaves unzipped. It has a red square pattern across the right shoulder, and a large, square-shaped '55' on the back, as well as two red drawstrings, threaded through the hood, hanging down on either side of his chest. Underneath, he wears a white scoop-neck T-shirt with a red design on the front, somewhat resembling two interlocking hooks. He wears plain black jeans, and a wallet chain with a skull charm, and pale brown shoes, each fastened by two zippers. While attending Hope's Peak Academy, he wears the school's uniform: a brown blazer and matching pants, a red tie and dark brown lace-up shoes. The top few buttons of his shirt he leaves undone, and over it he wears a sleeveless green sweater with a red v-neck collar, a wide, horizontal stripe across the middle of it. In Danganronpa Another Episode, as the Servant and Ultimate Despair, he wears a cropped black jacket, with three white buttons on the right and one red button on the left. Underneath, he wears a dark-red and olive-green scoop-neck shirt, with long sleeves that are folded over the cuffs of the jacket, and under this is a long beige undershirt. He wears black jeans with black low heeled shoes, tied with red shoelaces. He has a striped mitten on his left hand, to hide Junko's hand with long, red nails, sewn in place of his real hand. He also has a collar around his neck, given to him by the Warriors of Hope, with a chain hanging down the front, all the way down to his knees. The Servant is described to be constantly smiling, no matter what treatment he receives, and he is also said to have "a rather attractive face", and Genocide Jack even calls him "a pretty boy". His skinny build is also mentioned when she calls him "a skinny white-haired guy". After waking from a coma on Jabberwock Island and having his brainwashing is undone, he replaced his non-functional left hand from Junko's corpse with a robotic forearm and hand. The prosthetic is white on the outer side and black on the underside. The palm is black, the backs of his fingers are white, and his thumb is white as well. The sleeve of his coat has been ripped where the new arm is, most of the jagged material still attached. The arm makes a rather loud mechanical sound whenever he moves it. Nagito first comes off as a polite, friendly, and easygoing, yet somewhat insecure boy. Hajime Hinata even mentions that his bright smile is very comforting. He was the only one that stayed with Hajime while he was unconscious, and expressed concern for his well-being, even after Hajime told him to go away. Though friendly with everyone, he is mostly interested in spending time with Hajime and can be quite clingy, and as a result, Hajime considers him a little annoying and not the most reliable, but still thinks he's a kind person. Nagito attempts to be the team's conflict mediator and a poster boy for optimism, often encouraging others to be hopeful and to cooperate, however, he isn't taken very seriously. Hiyoko Saionji makes fun of him and considers his dramatic pep talks about hope and friendship embarrassing and tiresome. He is generally quite submissive and has a self-deprecating attitude, even agreeing with Hiyoko and the others' snide remarks. Although he claims to be a pessimist, Nagito often appears unusually carefree; he lacks tact and occasionally says awkward, strange, and unsettling things without realizing it. At times he can also be more forceful; he is quick to scold Hajime when he's being too pessimistic or when he thought he was bullying Mikan Tsumiki. He is also notably annoyed by Teruteru Hanamura's treatment of girls and takes it upon himself to keep an eye on him to make sure he doesn't harass anyone.