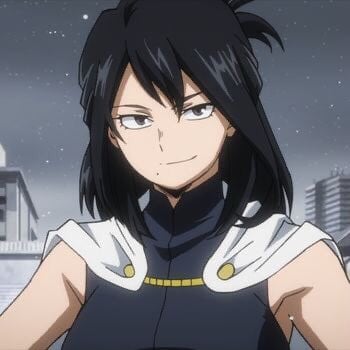 Nana Shimura was the seventh user of the One For All Quirk, the former mentor of All Might, a close friend of Gran Torino, and the grandmother of Tenko Shimura. Nana is described as a beautiful woman with a tough demeanor. She was a tall woman with a curvaceous figure, and at the same time, she was well-built, as befitting a One For All user. She was fair-skinned and had a small mole below her bottom lip, centered to the right, and sharp, intelligent eyes with long eyelashes. Her hair was dark and straight, kept shoulder-length, with the exception of a clump of short bangs hanging above her forehead, and was usually styled in a half-up-half-down bun. Her hero costume consisted of a dark, sleeveless bodysuit with a high collar, yellow elbow-length gloves, and white knee-high boots. Around her waist was a belt with an angular golden buckle, a small cape attached around the back which hung down to her knees, and over her shoulders was a longer cape, buttoned to the shoulders of her bodysuit. Nana was a kind woman with a strong sense of justice. She believed that a true hero should smile, no matter how grim the situation, since people who needed to be saved needed not only to have their lives protected but also their hearts; she showed great empathy and emotional resilience. Her overall value for bravery and happiness was where All Might would adopt his iconic smile to put other people at ease. Furthermore, Nana was a loving mother to her son before she died at the hands of All For One, and was shown to be compassionate, nurturing, and supportive of him. However, from her own son Kotaro's perspective, she was rather sinful. In a flashback of Tenko's childhood, his sister Hana showed him a picture of Nana and Kotaro as a child, with both of them being together and happy. When Kotaro found out about the discovery of the picture however, it is revealed that Nana left him in foster care at a young age due to her incapability as a mother and the dangers of her hero life. While this was a well-intentioned act on Nana's part, wanting her son to be safe and happy, it unfortunately had the opposite effect: Kotaro grew up to despise her and heroes entirely, believing that Nana selfishly abandoned him for the sake of helping others. Nana did not forget about Kotaro either, as she fell into tears after forcing herself to cut all ties with him. Although she initially regarded Toshinori Yagi's desire to be a symbol of peace as somewhat crazy due to him being Quirkless, she nonetheless brought him up with her trusted friend, Gran Torino. She subsequently took Toshinori as her student and successor, which is a testament to her openness and belief in the potential of others.