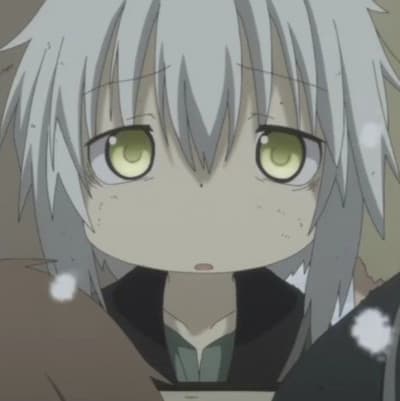 Nanachi is a Narehate; a person who survived the 6th layer's Curse of the Abyss and was left deformed as a result, but, unlike most other Narehate, still retained a sound mind. Possessing vast knowledge of the Abyss - its ecosystem, vegetation and even the use of the medicines, Nanachi is currently a part of Riko's party, assisting her in reaching the bottom of the Abyss. Their gender is ambiguous. Nanachi's appearance is very rabbit-like, save for a long sturdy tail, horizontally slanted pupils, carnivorous teeth and human-like hair; which is straight and cream-white in a short bobbed style, the sides of the bangs going down to the shoulders. In contrast, medium tan fur covers the rest of Nanachi, with light tan covering the insides of their ears and belly. They have a blush-like spot on each cheek; which has two thick whiskers protruding sideways. Other animal traits include a cat-like mouth with little fangs, yellow eyes with horizontal oval shaped pupils (similar to a goat's) and erect bunny ears. Their fingers are rather stubby. Nanachi's attire consists solely of gray-green, baggy, drop-crotch harem pants, with dark-pink hip-bags on both sides, red pant legs, and a pink flap that is supposed to cover their usually naked torso. Nanachi also wears a large, oddly-shaped headpiece the same colors as their pants. Attached to the sides of it are two curved horns that stick out horizontally. Hanging from the back there is a large layer of what appears to be shingles, covered by a layer of cream-colored animal pelts, and then another smaller layer of shingles. Nanachi's side bangs seem to be much longer when the helmet is on, going down to their hips, due to hair extensions of the headpiece. They are tied at the end with metal rings. After Nanachi's stay at Belaf's House, their helmet was redesigned, looking more reminiscent of delving gear now, with the horns curving more upwards and less sharp-looking ends. Its glass-like structures were replaced as one structure. Their helmet also received more feathers and cream-colored animal pelts, which are split into two sections, hanging form the back. The metal rings of the helment's extensions are now of a much simpler round design and located higher in the extensions, having two feather-like ends hanging from them. They typically walk upright, but sometimes will run on all fours if they are trying to move quickly. As a human, Nanachi had yellow eyes and short messy cream-white hair. They wore a light green one piece and over it a light brown coat with black sleeves, which was too big for them. Most of the time Nanachi is cool and reserved, keeping their distance emotionally and physically. Their attitude often borders on being sarcastic and even cynical. However behind this mask, Nanachi hides a kind and gentle soul, capable of deep compassion and selfless devotion. They are also quite bashful when complimented, seen in their reaction to being called "fluffy". They also express discomfort at being petted, especially by Reg. As human, Nanachi seemed to be more timid due to their prior life.