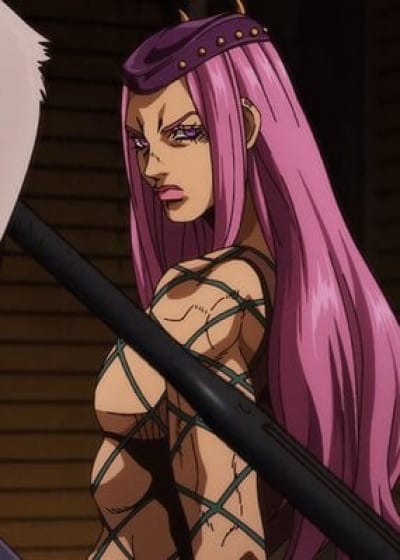 Narciso Anasui is a major ally featured in Stone Ocean. Anasui is an inmate in Green Dolphin Street Prison who falls in love with Jolyne Cujoh and decides to help her with defeating Enrico Pucci. Anasui is a Stand User who wields Diver Down in battle. Anasui is a man of above-average height and medium to athletic build. He is always seen with a slim, flat hat on his head, and he wears a form-fitting mesh over his upper body and lower legs, exposing most of his chest. The mesh is comprised of diagonal stripes which resemble a fishnet pattern with extremely large gaps between the clothing lines. One of the most prominent features of his shirt (or lack thereof) is the presence of footprint designs leading from his waist skirt and up onto his chest. This perhaps reflects one of the uses of his Stand, as Diver Down displays the ability to extend its arms and feet from within another person's body. In his first appearance, Anasui was depicted with short hair and was originally depicted as a woman, likely a disguise created using Diver Down to allow him to infiltrate the female prison. When he is re-introduced later, he takes on a more masculine design. In a panel in 2019, Araki said he changed the design to go beyond the normal standards of beauty. In the anime, this is not the case, his original appearance being that of a man's. Described at first as 'the type of person that doesn't help other people', even Emporio tells F.F. that 'if Weather Report wasn't there to keep him calm, there is no knowing what Anasui would do'. After meeting Jolyne, she becomes the target of his romantic obsession, despite the two of them having never formally met. Despite her lack of interest, he is singleminded in his pursuit of her hand in marriage. When they aren't in danger, he'll use anything in his arsenal to woo Jolyne—though he isn't successful and it's frequently used as a source of comic relief. Once he realizes that Jolyne is in danger, he will jump into the fray with little regard for his own safety. In love with the concept of her courageous and burning determination, Anasui mused that given the chance, he would follow Jolyne for eternity. He will treat anyone who isn't Jolyne badly; the mask of his 'noble' and 'protective' persona thinning to reveal his menacing and intimidating tendencies. Whether friend or foe, Anasui won't hesitate to kill anyone who disturbs his imaginary happiness with Jolyne. On one occasion, he threatens F.F. to not interfere with his work, almost strangling her when she almost disobeys. While he is more than willing to jump into action for Jolyne, he refuses to help anyone else unless he knows that Jolyne needs them. The main exception to this is of course, Jotaro Kujo, wanting his approval for his one-sided marriage proposal to Jolyne.