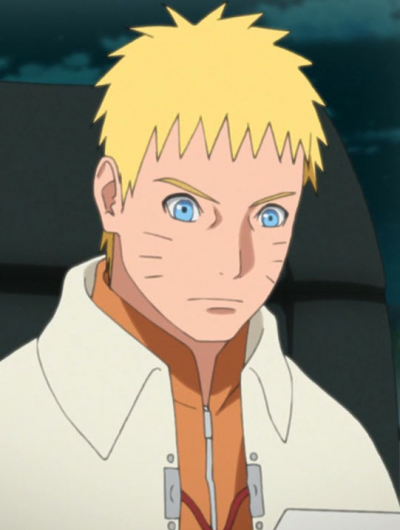 Naruto is a shinobi of Konohagakure's Uzumaki clan. He became the jinchūriki of the Nine-Tails on the day of his birth — a fate that caused him to be shunned by most of Konoha throughout his childhood. After joining Team Kakashi, Naruto worked hard to gain the village's acknowledgment all the while chasing his dream to become Hokage. In the following years, through many hardships and ordeals, he became a capable ninja regarded as a hero both by the villagers, and soon after, the rest of the world, becoming known as the Hero of the Hidden Leaf. He soon proved to be one of the main factors in winning the Fourth Shinobi World War, leading him to achieve his dream and become the village's Seventh Hokage. Naruto is characterized as boisterous, exuberant and unorthodox, quite similar to Hashirama Senju. He inherited his mother's verbal tic, as he ends his sentences with "Dattebayo!" when emotional. Though he responds best to competition and is not afraid to ask for assistance, Naruto is relatively naive, simple, and slow to understand principles or situations. He often requires an oversimplified analogy in order to grasp explanations, and can even forget some concepts that he himself noted earlier if he is too emotional. Naruto is aware of his faults, and admits he acts strong to mask his embarrassment and frustration about them. Despite his naivety, Naruto can be quite observant, picking up on things others miss and retaining information casually gathered through conversation. Growing up as an orphan who suffered years of hatred and social isolation by Konoha's villagers has influenced Naruto's character in a number of ways: he is heedless to formality and social standings, addressing certain people with nicknames instead of honorifics, although by the time of his adulthood, Naruto has slightly outgrown this trait, as he stopped referring to Lee as "Bushy Brows" and calls him by his name, while also referring to Killer B by his name instead of "Octopops"; he has picky eating habits of ramen, his favourite food; he has a perverted side that manifests as uses of the Sexy Technique or attempts to peep into women's baths; he didn't understand the real meaning of "love" and believes that loving and/or being loved by someone and ramen are both the same. Despite his quirks and the criticism they earn him, Naruto is said to have a personality that draws people to him. According to Jiraiya, Naruto strongly resembles his father: he has yellow-blond, spiky hair and blue eyes while inheriting the shape of his mother's eyes and face. His trademark characteristic are the three whisker markings on his cheeks. During the Fourth Shinobi World War, Dan Katō initially mistook Naruto for Nawaki due to their stark resemblance. Naruto was rather short for his age during Part I, though he grew to be taller than Sakura in Part II. Naruto originally wore green goggles on his forehead, though he discards them upon becoming a genin. After becoming Hokage, Naruto dons a garment similar to his father's: a white cape that has a red flame pattern around the hem, is held together by a red rope, and has the kanji for Seventh Hokage written vertically down the back. Underneath this, he wears an orange sweatshirt with black stripes (reverse in the manga version of Boruto: Naruto Next Generations), black pants and sandals. He occasionally wears the traditional Hokage headpiece but has stopped wearing a forehead protector.