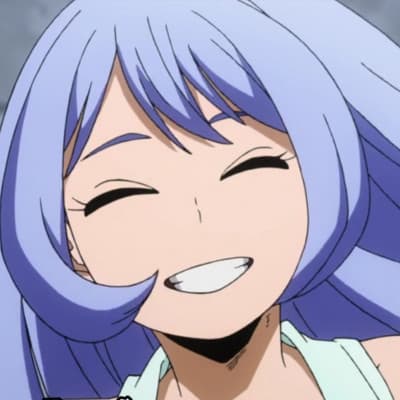 Nejire Hado, also known as Nejire Chan, is a student in Class 3-A at U.A. High School and is part of The Big 3. Nejire is a fair-skinned girl of average height with wide, curious eyes. Her upper eyelashes are long and thick, and her irises are a royal blue. Her hair is periwinkle, and it reaches all the way down to her knees, twisting around itself at her waist and curving inwards around her legs. She has side-swept bangs, tucked behind her ears on the right and hanging just over her eyes on the left, and two short clumps of hair on either side of her face, curved towards her face on the right and behind it, under her ear, on the left. According to the boys at U.A. and Yuyu Haya, Nejire is more of the "cute kind" than the "sexy kind." Nejire wears a waistcoat in place of the normal U.A. blazer with her school uniform like Kyoka Jiro occasionally does. Nejire's hero costume consists of a royal blue skin-tight bodysuit with a high black collar, pale mint green markings covering her torso from over her shoulders to between her legs, framed with turquoise, a matching stripe of the same two colors around both of her upper arms. On her feet, she wears a pair of knee-high boots, a thinning flap buttoned on each thigh, with turquoise spirals around her ankles, matching the thicker ones above her yellow gauntlets and wrist-guards. She has a black strap around the top of each thigh, two small satchels attached, and two spiraling horns of hair protruding from behind her ears that are shaped as a reference to her Quirk. After Dabi burned her with his flames, Nejire's hair is burned to shoulder length and the right side of her body is burned. The right side of her cheek is scarred. Nejire is naturally a very kind, talkative and endlessly curious girl who shows great interest in people's unique physical features and is easily distracted by them. Due to this, Nejire can be very blunt, often asking rather invasive or off-putting questions. Nejire is an affectionate person and a "free spirit," someone who has a genuine passion for learning new and strange things and isn't afraid to speak her mind or show how she feels. She seems to like knowing more than others, but not in a proud way, as she just enjoys explaining things to people and sharing her knowledge. She is mentioned to act like a kindergartner due to her childish glee. She is very enthusiastic, affable, and cheery, and is always seen moving. She shows compassionate side with Eri by doing her hair and playing with her on her free time. However, she has shown a more stoic nature during various situations; she was not very concerned for Tamaki Amajiki when she learns of his attack. Thanks to her inquisitive and chatty demeanor, she is a notably level-headed individual, though she comes off as an "airhead" most of the time. Despite her happy-go-lucky personality, Nejire is fierce in battle. When the situation calls for it, Nejire can be very calm and focused. Her curiosity never seems to extend to the enemy and she always maintains her focus on taking them down. During her battle against Tomura and High-Ends, Nejire showed great judgement, aptitude and anger, a side of which she does not often display. Her strong heart is what has allowed her to climb the ranks into one of U.A.'s top three students.